London, 1814. Horace Delaney, a merchant and landowner, has died. His daughter Zilpha and her grasping, ambitious husband Thorne stand to inherit everything. But, to Thorne's dismay, Zilpha's older half-brother James has returned from a decade in Africa (where he was presumed dead) to take on the inheritance. Part of this inheritance is land on Vancouver Island, of great importance to both the British Empire, the United States and the burgeoning Pacific trade with China. The East India Company is hungry to get its hands on that land, but finds that James has his own plans and he will not be moved from them.

Taboo is a dark and grim historical drama series conceived by actor Tom Hardy almost a decade ago. It's been a passion project for the actor, as he convinced his father Chips and his Peaky Blinders collaborator Steven Knight to write it and finally became famous enough to get it made as a co-production between the BBC and the American FX cable channel.

Taboo tries - and tries very hard - to be a dark and serious drama series. The lighting filters are turned down to the extent that some scenes may as well be in black and white, and characters utter, or mumble indistinctly, dark and portentous dialogue at the drop of a hat. Speaking of which, Tom Hardy struts around the series wearing an epic and impressive hat. The hat does a lot of the heavy lifting of characterisation that the writers don't bring to the party: James Delaney is a bit of a weirdo who fancies his sister and likes to talk in Native Americanese and keeps getting decent people killed, but we side with him regardless because he rocks that hat. The hat is all.

The series meanders and roams backwards and forwards. The central plot is that James Delaney owns some land and the East India Company wants to buy it and he doesn't want to sell it, so the East India Company embarks on plans of varying degrees of lunacy to try to get Delaney to sell it, or killed so it passes to his more flexible sister and brother-in-law. The East India Company as an Evil Organisation is well-established in fiction (in the Pirates of the Caribbean trilogy it even stood in as a sort of Galactic Empire of the seas) and here this mostly ahistorical image is sold by its boss being played by the always-utterly-magnificent Jonathan Pryce. Pryce's villainous monologues are utterly magnificent, improved by his splendidly belligerent use of English swearing.

Tacked on to this central storyline is a lot of other stuff. James and his sister have a weird and unhealthy relationship, his late father was remarried to a much younger woman who is recruited to dispute the inheritance but instead sides with James after he charms her with the hat, and James also has an interest in international politics, developing a curious relationship with an American intelligence agent. There's also a superstar celebrity chemist, played with excellent charisma and wit by Tom Hollander, and a bunch of local honourable prostitutes with hearts of gold (kind of) whom James recruits for various whimsical reasons. There's also the cross-dressing East India Company operative whom James recruits after he falls in love with him (or the hat), and the young wharf rat who attaches herself to James because she believes that - in the utter absence of any evidence - that he's really a good man and not the psychopath he first appears to be (and never really moves away from: in Taboo character development is optional). Oh, and Mark Gatiss shows up as the sleazily corrupt Prince Regent who steals every scene he is in.

Taboo certainly has fantastic production values. British shows set in the 19th Century are commonplace, but usually resort to clever camera angles and digitally painting out CCTV cameras to pretend it's a period piece. Taboo goes beserk with CGI establishing shots of the entire city of London, some terrific visuals of the Thames that eliminate all of the modern buildings and warps things back to two hundred years ago and also some very subtle manipulation of background images to sell the setting and imagery. Sometimes the CG is too obviously fake - some of the shots from bridges are obviously greenscreen - but mostly this extra money and CG whizz is used to sell the setting. There's also some great costume work and a great final battle sequence involving explosions, gunfire and sword fights that is excellently choreographed. 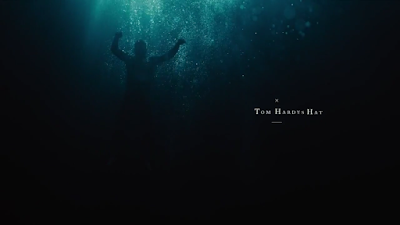 The main problem with Taboo will also be, for some, its main selling point. This is a series that aspires to be Dark. The themes are dark, the ideas are dark and the characters are dark. But there is a very fine line between things being dark and things getting a bit silly. Taboo not only crosses that line, it smashes through it with a sixteen-wheel truck (complete with Tom Hardy strapped to the top playing flamethrower guitar, probably). In fact, Taboo may have created an entirely new subgenre: grimcamp.

It's really not possible to take Taboo seriously as a real piece of drama: it is far too po-faced, utterly implausible and nonsensical for that. But treat it as Tom Hardy trolling the entire world and as a slice of high hokum, and it springs to life. You can play the Taboo drinking games (one shot each time Zilpha has a naughty dream about James, another each time James appears to have been thwarted before it's all revealed to be part of a Xanatos Gambit, another each time Jonathan Pryce drops an F-bomb), go online to extol the virtues of Tom Hardy's hat (which deserves its own place in the credits) and ponder real estate values of land on Vancouver Island and why the USA gives the British landowner rights any credence at all.

This is also the Tom Hardiest thing that Tom Hardy has ever done. He struts into scenes with his big black coat and his epic hat and mumbles incoherently about his Dark Doings in Africa and/or America before having a vision of his Native American mother and then leaving. You'll have no idea about what he's doing or what's just happened, but he sells it so well that you don't really care. James Delaney is incredibly po-faced but you can tell that Hardy is having the time of his life. With that hat.

Amongst the supporting cast and crew - most of whom have been poached from Game of Thrones, Pirates of the Caribbean and/or Peaky Blinders, which is appropriate as the series feels like a fanfic mashup of all three - Tom Hollander and Jonathan Pryce do outstanding work, Jessie Buckley is excellent (and I suspect a star in the making) and Mark Gatiss does scene-stealing debauchery as only he can. Some of the cast is less successful: Oona Chaplin clearly does not have a clue what the hell is going on and sleepwalks through half her scenes, whilst Jefferson Hall (also ex-Game of Thrones) plays her arsey husband without much motivation.

Take the first season of Taboo (***½) seriously as a piece of drama and art, and you will be massively disappointed. Accepted it as a piece of pulpy cheese presented to you by Tom Hardy wearing a fun hat, and it becomes altogether more enjoyable. Implausibly, the series will return next year for a second season, apparently set in the Azores. Whether Tom Hardy's hat will also return is as yet unclear.
Posted by Adam Whitehead at 17:15

I have to say the idea that the prostitute characters were either honourable or had hearts of gold doesn't really seem right to me. They were pretty much just like the rest of James' hangers-on, bits of flotsam in the world, flawed people.

I'd also disagree slightly about Jefferson Hall. He has one job, to make abandoning your place in society for an incestuous relationship with your brother seem like a reasonable alternative to spending another minute with him, and he manages that with aplomb.

But the basic point - that the brilliance of the series is that it's so far over the top that the top is but a distant memory - nobody can argue with that.

Tell us more about The Hat.

The Hat seems to be a thing this year. SS-GB is also a bit daft but definitely gets better when Sam Riley puts on his hat and starts doing his Batman voice for no reason.

Speaking of Peaky Blinders, any chance you'll be reviewing that series?

Hardy's "harumpf" is probably the best in TV history. It is deployed frequently to great effect and has seen me practising it in front of a mirror for work purposes.

Do you happen to know where an accurate portrayal of the East India Company may be found? In general, I am looking to better understand the history of colonialism. Thanks.

I'd say the whole point of it was actually the ambiguity of James Delaney, whether or not he was really as menacing as he appeared to be. It's not hard to see Tom Hardy conceive of such a character, as until he had the breakthrough with Bronson he'd been known as a scrawny guy trying to be someone and not really succeeding. So when he caught on as a tough guy, it was probably something he tried to reconcile with what he'd always known previously about himself, and thus: Taboo. Which is to say, James Delaney is really just a massive bluff no one successfully calls. The hat is his biggest tell, a massive piece of overcompensation that distracts and distracts but somehow doesn't make him look silly. He pulls it off. Folks, he pulls it off...

Peaky Blinders I think is winding down. I'll probably watch it once the whole series is done.