The Solo Han Solo Movie (which should really be its title) now has a storyline. Well, you'd hope it already had one given they're shooting it now, but the story has now been made public. 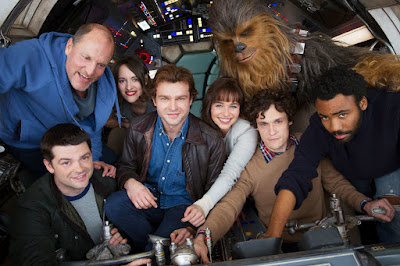 The film will span six years in the life of everyone's favourite smuggler, starting with him on Corellia as a 18-year-old and ending eight years later with him in possession of the Millennium Falcon, having met Lando and Chewbacca along the way. This is an interesting new turn for the Star Wars movies, which have typically been tight, focused affairs. This new, multi-year epic is a new approach.

The Solo Han Solo Movie is currently scheduled for release in May 2018. It is directed by Phil Lord and Chris Miller (The Lego Movie, Cloudy With a Chance of Meatballs, 21 Jump Street) and written by Jake Kasdan and his father Lawrence (The Empire Strikes Back, Raiders of the Lost Ark). Alden Ehreneich stars as Han Solo, with Donald Glover as Lando, Joonas Suotamo as Chewbacca, Woody Harrelson as Beckett (Han's mentor) and Emilia Clarke, Michael K. Williams and Thandie Newton is as-yet-unnamed roles.
Posted by Adam Whitehead at 19:19