Seven years after the death of the Emperor and Darth Vader, the galaxy is in a precarious state. The New Republic is trying to unite the galaxy again under a democratic banner, opposed by areas where remnants of the Empire still hold sway, but many worlds have become lawless. A Mandalorian warrior finds himself serving as a bounty hunter, taking on commissions to survive...until his latest contract changes everything. 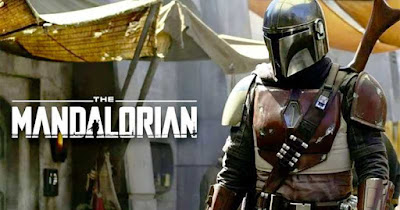 The Mandalorian represents a historic moment for the Star Wars franchise. After forty-three years, it is the first live-action, ongoing TV series in the franchise's history, something people have dreamed of seeing since 1977. For having such weight on its shoulders, it is surprisingly low-key.

The show has a tight focus on the central character, played by Pedro Pascal (Game of Thrones, Narcos), who (almost) never takes his helmet off and is a taciturn warrior. With only a blank helmet to emote through and relatively rare bursts of dialogue, Pascal does a sterling job of giving his character an identifiable motivation, gravitas, charisma and dry humour. The supporting cast, from Carl Weathers (Predator) as the Mando's erstwhile boss, director Werner Herzog as a villain and Gina Carano (Deadpool) as a former Rebel shock trooper turned reluctant ally to the Mandalorian, are also excellent.

The show has a really interesting filming style, with a strong use of both location filming and virtual sets which have been taken to the next level, using techniques developed on showrunner Jon Favreau's recent Disney live-action movies. For the most part these are brilliantly realised, giving the show a sense of realism and scale that almost no science fiction TV series has ever achieved before. What is interesting is also how restrained the show is: this is  a space Western, mostly set on dusty frontier worlds and in seedy cantinas, with shady backroom deals going on which threaten to explode in violence at any moment. The visual effects and battle sequences are also, obviously, exceptional, and the end credits for each episodes are works of art on their own merits.

The structure of the series is also refreshing. In the last year or so it's felt like there's been a slight backlash to constant serialisation as several high-profile shows have retreated from stretching single stories over dozens of episodes to instead mix self-contained narratives with continuing subplots. After this worked well in The Witcher and before it did in Tales from the Loop, The Mandalorian does the same here. Continuing threads run through the season as the Mandalorian tries to survive and protect a mysterious alien child he finds on one of his missions, whilst also dealing with a series of crises-of-the-week. These include defending a village on a planet from attack by mercenaries and helping rescue a prisoner from a prison transport. Eventually there is a reckoning, hinting at a more serialised second season, but the story unfolds much more organically this way. The producers are also happy to have some of the episodes be quite short and focused, wrapping up in 40 minutes rather than dragging out to more than 60 without enough story to fill that time.

Weaknesses are few: the fifth episode is a bit forgettable, I guess, and there's perhaps an overreliance on some staple Star Wars tropes (an audible grown can be heard as they tap the Tatooine well once again), but the execution is otherwise superb, with great writing, direction and effects.

Season 1 of The Mandalorian (****½) finally gives us the live-action Star Wars TV show fans have wanted for forty years, and does an exceptionally good job of it. It is available to watch worldwide now on Disney+. Season 2 of The Mandalorian concluded shooting before the coronavirus pandemic began so will hopefully hit its October 2020 release date.
Posted by Adam Whitehead at 15:28

What do you think of the rumors that episode five's Tatooine appearance will make sense in hindsight, because they were setting something up for Season 2? (the mysterious figure that appears in the end teaser)