Gideon the Ninth by Tamsyn Muir

The orphaned Gideon Nav is a servant of the Ninth House, the guardians of the Locked Tomb, a position she despises. After her latest escape attempt is thwarted, she is recruited to join the House's heir, the necromancer Harrowhark, on a mission to the First House. If successful, the Ninth will gain influence and power in the eyes of the Emperor. But strange tasks await scions of all the Houses, some of which will prove fatal even to those with power over the death. 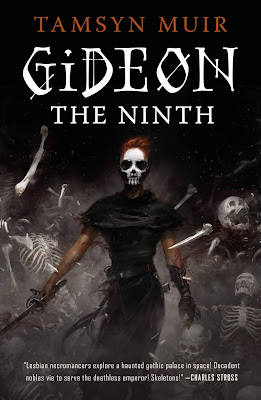 Gideon the Ninth is the debut novel by Tamsyn Muir and the first novel in the Locked Tomb trilogy. It has attracted widespread critical acclaim, including being nominated for both the 2020 Hugo and Nebula Awards and coming third in the Goodreads Choice SF Awards in 2019. The novel defies easy categorisation, incorporating as it does elements from science fiction, fantasy and horror, with a tone that could perhaps be summed up as "Mervyn Peake writes Warhammer 40,000."

The book is a technogothic thriller, where the mismatched Harrowhark and Gideon reluctantly work together with (and against) representatives of the other eight houses to investigate the mysteries of the First House to see who is worthy of becoming the new Lyctor, the right hand of the Emperor. The setting, an empire of nine planets circling a central star, is painted in vague strokes because our only POV character, Gideon, has only ever lived on the gloomy, depressing and death-obsessed Ninth and has no idea what the other worlds are like. Worldbuilding is drip-fed slowly into the narrative, painting a very intriguing picture of an empire which has endured for ten thousand years against remote, external threats thanks to the undying vigilance of the mysterious god-emperor, whose real history, motivation and even name remain a mystery.

Gideon, our main protagonist, is self-reliant, independent and resentful of authority, but is also fascinated by mysteries and yearns for freedom but isn't entirely sure what to do if she was to achieve it. She is in a dubious, co-dependent relationship with the officious Harrowhark, who strives to be an enigma and be respected (qualities that do not always combine well) but finds this difficult to achieve due to her and Gideon's mutual hatred. Their relationship is at the core of the novel and it's probably not a huge spoiler to say they eventually find an accommodation and a way of working together against mutual, greater enemies, although I must admit I found the swing from outright enemies to banterish frenemies to be a bit abrupt. Gideon is a strong (if archetypical) protagonist whose more relaxed, informal and pomposity-puncturing form of speech can be a bit of a relief when things threaten to go Turned-to-Eleven Gormenghast in terms of oppressive atmosphere and baroque chicanery.

The book incorporates a small secondary cast of characters from the other houses, such as warriors like Marta Dyas, Naberius Tern and Jeannemary Chatur, and house heirs like Dulcinea Septimus and Palamedes Sextus. Muir has a superb way with names and paints the secondary cast with skill and wit, from Chatur's youthful exuberance to Tern's lethal confidence to Septimus's wounded bird charm.

The story unfolds at a measured pace, perhaps a bit too measured: the first half of the novel is on the slow side of things and, given the rather limited number of characters and locations, it does feel like it takes a bit too long to get going. Once it does, though, it doesn't stop. The second half of the book is a near-dizzying eruption of plot revelations, deaths and unexpected twists that is quite compelling.

The other major weakness that comes to mind is the book's tonal dissonance between the ritual-obsessed, formal world and Gideon's near-non sequitur pop culture references. Gideon's informality and ability to take the mickey out of every situation is often entertaining, but on a few occasions (such as direct dialogue quotes from both the US version of The Office and The Simpsons) it lifts the reader right out of the world and story. These times are relatively rare, but feel a bit jarring.

Overall, though, Gideon the Ninth (****½) is a strong debut novel, a dark and bleakly humorous journey through a world of necromancers and grotesques. The novel is available now in the UK and USA. The sequel, Harrow the Ninth, will be published in August 2020.
Posted by Adam Whitehead at 13:26

Heyoo - you should delete or fix The Brotherhood without Banners link - def doesn’t seem to be going to what I expected you intend to link to.

I found this to be one of the better novels I've read recently, partly for the contradiction in tone between grim dark formality and Gideon's banter. I watch almost no TV, though, so I did not recognize the quotes from Simpsons or the Office. I wonder if that would have detracted from my enjoyment. The author's ability to paint relatively vivid characters, as you point out, was one of the biggest saving graces of the novel... I started to get lost in the names and titles.

I admit, I don't watch much pop culture, so while I picked up on the modern styles of the prose, I didn't pick up on direct quotes. Perhaps it would've been more jarring if I had. When I talked about the book on my own blog, this is what I said as re: the prose and dialogue.

"Muir's prose is just gorgeous, evocative in its detail, with a feeling of timelessness, almost old-fashioned prose, really. The dialogue, however, is defiantly modern, and rather then switch prose style to match, she places that evocative prose alongside the dialogue and refuses to admit they don't belong together. It's a wonderful trick, sustained throughout the book, and by the end of it, it's not that they don't belong together and don't know it - it's that they do belong together and you didn't know it."