A time of myth and magic, after the fall of Rome but before the rise of Camelot. The Elder Isles, located in what people would later call the Bay of Biscay, are riven by political intrigue. King Casmir of Lyonesse desires to unite the ten kingdoms of the islands under his rule, but his ambitions are contested by the naval power of Troicinet and the neighbouring kingdom of Dahaut, whilst the implacable Ska prowl along the coasts. Casmir seeks to make a match for his daughter Suldrun to bring him advantage, but Suldrun is unconcerned with politics, instead preferring the solace of her favourite garden. When a young man is washed ashore and is rescued by Suldrun, the fate of the Elder Isles is abruptly changed. 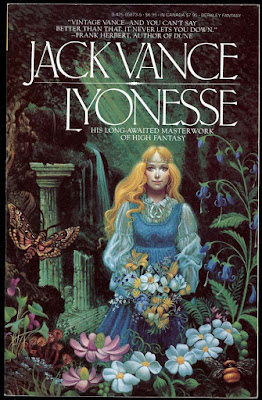 Discussions of Jack Vance tend to focus on his Dying Earth quartet, published irregularly between 1950 and 1984, which had a permanent and transformative effect on the entire genre of the fantastic, influencing everything from Dungeons and Dragons to Dune to The Broken Earth Trilogy. Although a grand work, the Dying Earth series suffers from an inconsistency of tone and quality and, as an older one, parts of it have not aged as well as others.

The Lyonesse Trilogy (Suldrun's Garden, The Green Pearl and Madouc) is lesser-known but more accomplished, as its World Fantasy Award attests. The trilogy was written much later in Vance's career (began in his late sixties, concluded when he was 75), when he was still at the height of his powers, and unlike his other major series (Dying Earth and The Demon Princes) he did not let decades elapse between volumes, resulting in a much more focused, consistent and coherent story.

The setting is a fictional, large archipelago of islands off the south-western coast of Britain. It is here that the storied Ys, Avallon, Hybras (or Hy-Brasil) or Lyonesse of Arthurian legend may be found, although the events of Arthur are still several generations off. Instead, the Elder Isles are riven by multiple conflicts. In the temporal world, the islands are divided between ten kingdoms, all threatened by the invading Ska and Celts. In the religious, the islands' native, pagan beliefs are threatened by encroaching Christian missionaries. And in the magical, the islands' magicians, fairies and non-human creatures find their powers waning against the onset of mundane humankind.

As with most of Vance's work, the tone can be humorous but also melancholic and sometimes tragic. Vance wrote the trilogy in the knowledge that he was losing his sight (and, indeed, by the concluding volume was legally registered as blind) and a subplot in which a protagonist is cursed with blindness cannot help but resonate more strongly with this knowledge. But this fear did not daunt Vance: Suldrun's Garden sparks with his wit (sometimes mordant) and impeccable storytelling skills. With its courtly intrigue and manners (arch-rivals who despise one another nevertheless do so with politeness) and its sometimes fairy story tone, the book occasionally recalls Tolkien, although the characters are decidedly less moral.

It's this mixture of epic fantasy, fairy tale and moral fable, with high and courtly intrigue blended with merciless warfare, that makes Lyonesse feel unique. The magicians of the Elder Isles are extremely powerful, but are controlled by an edict that means they cannot make open war on one another (as to do so would destroy the islands). As a result they tend to work through proxies and stay within the confines of their laws, which results in some amusing scenes where the magicians' duels are as much legal arguments as they are dramatic confrontations. This is accentuated by the book's use of fairies, here presented much in the Irish mode of being capricious, whimsical and utterly uncaring of the fate of mortals, resulting in extremely tense negotiations between humans and the elder race, which are prone to unforeseen circumstances.

Characterisation is strong, with Princess Suldrun of Lyonesse presented as our main protagonist for much of the first third of the book, confined to her garden first by her preference and then by the orders of her father. Vance's portrayal of female characters earlier in his career was lacking, but is much-improved here, with Suldrun and several other women given prominence in the text. Unfortunately, the book's 1980s-ness can be deduced by several sequences where sexual violence is threatened (or intimated to have occurred off-page) against the female characters, a tiresome trope which is not over-indulged in (Vance is certainly no Goodkind) but also wearisome by its presence.

Narratively more regrettable is the odd choice where, by having established the less traditional heroine Suldrun as our protagonist for a good hundred pages, she is thrust aside in favour of Prince Aillas of Troicinet, an intelligent and resourceful young man who is brave, good with a sword, cunning when his back against the wall, etc. Aillas is an amiable and enjoyable, if far more traditional, character, but having him effectively storm in and take over the book halfway through from the character whom the novel is named for feels inelegant.

Once you move beyond these problems, Suldrun's Garden (****½) earns its reputation. The prose and razor-sharp dialogue is a delight, the worldbuilding which mixes political intrigue with magical menace is impressive and the fast-moving storyline (which packs more plot movement and characterisation into 400 pages than some authors manage in 4,000) is compelling. The novel is available now in the UK and USA.

A note on the text: the book is correctly entitled Suldrun's Garden, but on release it was often published under the title Lyonesse. This is corrected in more recent editions as Lyonesse: Suldrun's Garden. It is important when choosing an edition to read that you don't confuse the single-volume edition of the novel with the various omnibus editions of the trilogy, which are often also published as Lyonesse. The reason for the discrepancy - which recurred in 2006 with Brandon Sanderson's The Final Empire, frequently published under the series title Mistborn instead - is unclear.
Posted by Adam Whitehead at 12:51