Temuera Morrison to return as Boba Fett in THE MANDALORIAN

The Hollywood Reporter is reporting that Star Wars actor Temuera Morrison is playing the role of Boba Fett in the second season of The Mandalorian. 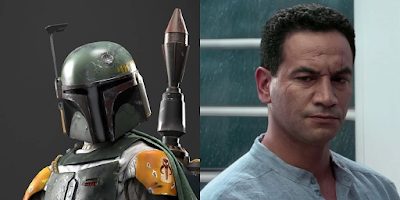 Boba Fett is one of the most iconic characters in the Star Wars trilogy. He first appears in The Star Wars Holiday Special (1978), which is better left unmentioned, but canonically first in The Empire Strikes Back (1980). He was played by Jeremy Bulloch, who returned to the role in Return of the Jedi (1983), where the character was apparently killed off, swallowed by the fearsome Sarlaac beast. The character became a firm fan favourite, and George Lucas okayed the character's resurrection in the Expanded Universe of roleplaying games, novels and video games, where it was revealed that Fett, helped by his Mandalorian battle armour, had been able to survive for several hours in the Sarlaac's stomach before breaking free with his jet pack.

Temuera Morrison was cast as Boba's "father," Jango, in Attack of the Clones (2002). Boba, actually a young clone of Jango, appeared in the same movie, played by Daniel Logan. Morrison also played the Republic Clone Troopers in the same film and returned in that capacity in Revenge of the Sith (2005). Morrison reprised various Clone Trooper roles in numerous Star Wars video games and also recorded dialogue to replace Bulloch as Boba Fett in DVD and Blu-Ray re-releases of the original Star Wars trilogy.

The casting of Morrison is slightly incongruous - he's about a dozen years older than Boba would be by the time of The Mandalorian - but assuming he keeps his helmet on through the whole thing (as is Boba's MO), that shouldn't be too much of an issue, and fans will no doubt welcome his return.

Shooting of the second season of The Mandalorian was completed several months ago, just before the pandemic shut down global filming, and Lucasfilm have so far confirmed that the season is on target to hit its October 2020 release date on Disney+.
Posted by Adam Whitehead at 21:51