The Northern Kingdoms are braced for war. The great southern empire of Nilfgaard is on the advance, plotting to annex more territory. The north is divided. The fate of the continent may depend on three individuals: Ciri, a princess and heir to a fallen nation; Yennefer, a sorceress who is not sure what it is she wants; and Geralt, a witcher, a hunter of monsters who has learned that the worst monsters walk on two legs, wear clothes and pretend to be just. 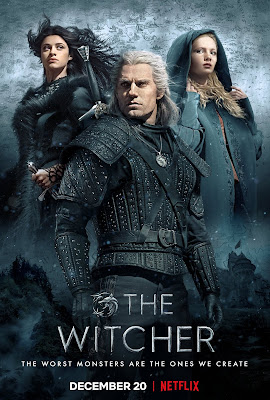 It may be difficult to think now, but when HBO launched Game of Thrones in 2011 it was taking a massive gamble, one may critics thought was doomed to fail. It turned out that HBO's call was the right one, delivering the biggest watercooler show and the most globally successful drama series of the decade, and making fantasy cool again overnight.

Other networks wanted in on the action and have been snapping up fantasy novel series all over the shop, and the early failures (like MTV's poor Chronicles of Shannara) don't seem to have taken the wind out of their sails. Amazon has Lord of the Rings: The Second Age and The Wheel of Time both in production, the BBC and HBO's His Dark Materials is already airing and Netflix is going all-in on the fantasy genre. It has a live-action reboot of Avatar: The Last Airbender in pre-production and a new take on The Chronicles of Narnia in the planning stages. But before those arrive, it has rolled the dice hard on The Witcher.

The Witcher is a cult European fantasy success story which shifted a couple of million copies in its native Poland and other parts of eastern Europe in the 1990s, but went global thanks to a trilogy of well-received video games from CD Projekt Red. The games have now sold over 30 million copies (outselling the books 6-to-1) and The Witcher 3: Wild Hunt is now being cited by many critics as the greatest video game of the decade.

Netflix's show is based firmly on the distinctly cheaper-to-licence books, specifically the first two (the short story collections The Last Wish and Sword of Destiny) but also drawing on some story elements in the first two novels proper, Blood of Elves and Time of Contempt. Those looking for a linear, chronological adaptation of the books best look elsewhere. Showrunner and head writer Lauren Hissrich has taken the stories from the early books and blended them together to turn an episodic story which gradually becomes more serialised into a single, big-picture epic from the off. This structural decision winds up being the show's biggest mistake, creating a story which is often unnecessarily confusing and which muddles both characterisation and stakes.

Effectively, The Witcher uses the same timeline structure as Christopher Nolan's Dunkirk, having one story (Yennefer's) unfolding over thirty years, another (Geralt's) over fifteen and another (Ciri's) over a few weeks. Whilst Nolan actually told the audience what was going on, there is no indication in the show that we are viewing three disconnected narratives, at least not until the fourth episode when Geralt finally reaches Ciri's homeland and instead of finding it in flames and under enemy occupation, he's instead meeting a younger version of Ciri's grandmother. Once you understand that, the show makes a bit more sense but this doesn't solve the relating problem that Ciri's story is simply too thin for the amount of screentime it gets.

The teenage Ciri is in almost every episode, a result of casting Freya Allan as a series regular, which is baffling because she doesn't need to be. Ciri's entire Season 1 arc is her escaping a bloody battle, running through some woods, getting captured a couple of times, escaping and eventually finding a temporary safe refuge. This entire storyline could have been told in one episode. Spreading it over eight means both a lot of wheel-spinning in her story and constant interruptions in both Geralt's and Yennefer's stories, which are generally a lot more interesting.

The other main negative is the quality of the effects. The effects for creatures, such as the striga and kikimores, are generally excellent and impressive. A terrible dragon in one episode, which looks like a PS3-era video game, is the exception. Environmental effects, magic and especially the depiction of a big battle sequence in the first episode are absolutely woeful, with a lot of painfully obvious greenscreen. Although The Witcher's budget is reasonably solid (at $7 million per episode, adjusted for inflation, it's roughly comparable to the first two seasons of Game of Thrones), it's clear it was insufficient to do the things asked of it. Better that the show hadn't bothered and left those scenes offscreen (as they are in the books) and spent the money elsewhere, such as the prosthetics for the elves and dwarves which are also not great (the dwarves more or less get away with it, but the elves look like under-prepared and under-budgeted cosplayers).

Another problem, although this varies by episode, is the running time. Several of the episodes are 60 minutes long but run out of story at around the 35-40 minute mark, meaning a lot of spare time that's taken up by filler (usually another episode from Ciri's story) or redundant dialogue. The freedom of not having a set running time is great when an episode badly needs a bit more time to do its story justice, but it can backfire when the opposite is the case.

Fortunately, and this saves the show, the performances are very solid, with Cavill splendidly gruff as Geralt but bringing out the (often well-concealed) wit and charm of the character when required. Anya Chalotra may be the stand-out revelation of the cast, having to play considerably older than her years to reflect Yennefer's world-weariness and cynicism. Freya Allan is also very good as the young Ciri, whose world been shattered by harsh events and she needs to adapt to a rapidly changing situation without being prepared for it.

Of the recurring cast, Jodhi May is exceptional as Queen Calanthe, whom she plays like King Robert Baratheon in his prime. MyAnna Buring is also very good as Tissaia (a minor character from the books who is given a much larger role here as Yennefer's mentor) and Emma Appleton is memorable as Renfri, who is only really present in the first episode but shows up in flashback as a framing device for Geralt's acceptance of his destiny. The performances throughout are pretty strong. Joey Batey's performance as Jaskier (aka Dandelion) is also pretty good, especially as they lean on the actor's real-life singing and musician skills, but I can see him annoying some people. That's half the point of the character but may grate with some viewers. Overall both characterisation and performances are good, enough to overcome some decidedly ripe dialogue at times.

Disregarding the unnecessary timeline structure, the story arcs are also reasonably compelling. Yennefer's is by far the best. Depicting her backstory on-screen is a splendid choice and we see her growth into the person she is in a way that sells the character very well. Geralt's development is more subtle but also more nuanced, as we witness his initially aimless, self-reliant drifting turning more into an acknowledgement he needs other people around him and then his adoption of finding Ciri as his goal.

The fight sequences (at least those not involving CGI) are also very impressive and the soundtrack is superb, so those departments can rest easy knowing they've done a superb job.

The result is...okay. The first season of The Witcher (***½) is fine. It's not great but it's not awful either. An unnecessarily puzzling timeline structure, some ripe dialogue and some dodgy effects make the series feel cheaper and less professional than it really should, but some great performances and effective character arcs bring the show back to the level of watchability, and a few good laughs and a great score improve a little over that. The second season certainly promises to be a lot better. Season 1 of The Witcher - which is more the 2007 original video game than the 2015 exceptional one - is on Netflix now and Season 2 starts shooting in February for a 2021 debut.
Posted by Adam Whitehead at 18:01

For me I noticed the different timelines in the third episode first, in the ballroom with the child versions of Foltest and Adda

I'd also add that the world building (especially the magic system) is very inconsistent. Magic users can subdue whole crowds, stop enemies in time, or teleport away with no trouble, then conveniently forget how when then plot demands it.

The character motivations can also be ridiculously inconsistent. In one episode, the queen demands to know why Geralt returned even though she threatened him not to. In the next sentence she blames him for not being there for her grand daughter sooner.