THE WITCHER becomes the second-biggest Netflix show of the year, drives game sales

Netflix's The Witcher is a bona fide smash hit. The streaming service has confirmed that The Witcher was one of their biggest hits of the year, only being decisively beaten worldwide by Season 3 of Stranger Things. The impressions the show made are also way in advance of other streaming services, including Disney+'s The Mandalorian. 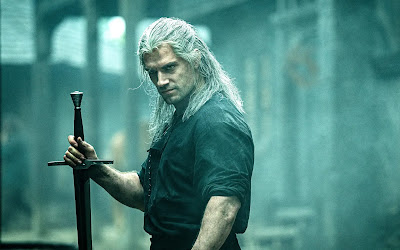 The Witcher was seen as a somewhat risky move for Netflix. Following the success of Game of Thrones, Netflix had made the decision to move decisively into the live-action fantasy TV space, developing not just The Witcher but also a fresh version of C.S. Lewis's The Chronicles of Narnia and a live-action reboot of cult animated show Avatar: The Last Airbender. Rival streamer Amazon picked up the much-better known Wheel of Time book series and the ubiquitous Lord of the Rings IP, which seemed like much surer bets. The Witcher books, which had only been available in English since 2007, had sold a relatively modest number of copies in comparison.

However, a video game trilogy by CD Projekt Red based on the books had sold a lot better, shifting 30 million copies since 2007 (20 million alone of The Witcher 3: Wild Hunt, released in 2015). Although the TV show is not based on the games, and due to various licencing issues could not use any material from them, it benefited from star Henry Cavill being a huge fan of the games and from some cross-over talent, such as sharing some actors in common and also a CG effects team.

The Witcher's success put it ahead of Martin Scorsese's film The Irishman and big TV shows including The Umbrella Academy and, startlingly, The Crown. Netflix's huge and monstrously expensive (at a reported $12 million per episode) prestige show about the life of Queen Elizabeth II launched its third season this autumn but surprisingly failed to make the Top Ten Netflix dramas in either the UK or USA.

In the UK, The Witcher was in fact the biggest and most popular drama series of the year, pushing Stranger Things down to third place (behind Ricky Gervais vehicle After Life, a much bigger hit in the UK than the US).

The success of the TV show seems to have resulted in a big push in game sales, with The Witcher 3: Wild Hunt shooting up the Steam Charts and scoring its biggest-ever number of concurrent players, larger even than when the game launched in 2015. The success was not only pushed by the success of the TV series, but also by the game hitting the top spot in numerous "Best Games of the Decade" lists.

It's not yet been confirmed if book sales are also up, but given the success elsewhere this seems highly likely. The first book in the series, The Last Wish, has recently been reprinted with tie-in art for the TV series.

The Witcher - hopefully with a nice budget hike - has already been renewed for a second season which starts shooting in February for a likely early 2021 debut.
Posted by Adam Whitehead at 22:42

Email ThisBlogThis!Share to TwitterShare to FacebookShare to Pinterest
Labels: cd projekt, netflix, news, the mandalorian, the witcher, the witcher 3

It was a great series helped by the performance of Henry Cavill. I'm not his biggest fan but he was great as Geralt. The show had great performances throughout, and the sword fights were amazing. If not for the confusing timelines that confused a lot of people, and some iffy CGI, it would have been perfect.