Billions of years ago a war raged between two races whose powers and abilities far outstrip those of humanity. One of those races sent a semi-intelligent compound known as the protomolecule to the Solar system with the intent of building an immense gateway, leading to more than a thousand other worlds orbiting other stars. The Sol gateway is now complete, sparking a gold rush as refugees and prospectors flee to the new worlds. The first world to be so settled is Ilus, now a potential flashpoint between Belter refugees and Terran corporate interests. UN Secretary General Avasarala sends James Holden and the Rocinante to mediate...at the same time an OPA breakaway faction is making a move of its own in the Belt and on Mars. 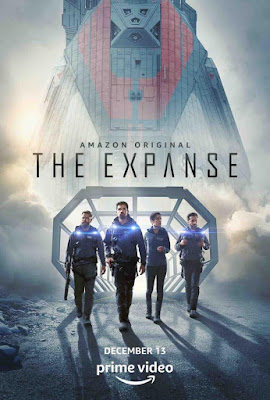 The Expanse is the best space opera TV series of modern times, maybe the finest since the 1990s genre heyday of Deep Space Nine, Babylon 5, Stargate SG-1 and Farscape. For three seasons, SyFy crafted a remarkable, entertaining slice of drama which can happily stand alongside any terrestrial-set "Golden Age" show. Then they cancelled it.

Fortunately, the richest man in the world turned out to be a huge fan of the series and was able to save it, with at least a further two seasons due to air on Amazon (Season 5, shooting at the moment, will air next year).

Season 4 of The Expanse is based on the fourth book in the novel series, Cibola Burn. Readers of the books will know that this story is the most static of the series, with the action being almost entirely restricted to one planet. To mix things up, the TV show also adapts the novella Gods of Risk, focusing on Bobbie on Mars, and adds some new storylines focused on Drummer and Ashford tracking down breakaway terrorist Marco Inaros (setting up the fifth season) and Avasarala seeking re-election as UN Secretary-General.

This addition of new storylines and a slightly reduced episode count (10 rather than 13) gives the series both a good sense of pacing and maintains the epic, solar system-spanning feel of the earlier seasons whilst also staying true to the books. The focus is firmly on events on Ilus, however, which gives the show a new feeling: open skies above our characters' heads, strange alien ruins to investigate (which occasionally makes things feel a bit like the movie Arrival) but still a lot of cynical politics to navigate.

This gives us the best new character of the season, Adolphus Murtry, played by Burn Gorman (Pacific Rim, Game of Thrones, Torchwood). Murtry is much more of an obvious villain in the book, but here gains slightly more nuance (pitting him as the mirror image of Amos). Gorman's performance is typically strong, being both charismatic and morally repugnant. Other strong new performers include Lyndie Greenwood as Dr. Elvi Okoye, Rosa Gilmore as Lucia Mazur and Keon Alexander as Marco Inaros, the latter of whom will play a crucial role in the next season or two and is suitably, sleazily charismatic.

The writing and performances are strong, and the visuals much improved by Amazon's higher budget. Many of the shots in this season feel like they're straight out of a much bigger-budget feature film. The show also continues its much greater focus (than most space operas) on realistic physics, such as a tense scene where one ship has to tow another to a higher orbit and another where the characters have to brace themselves for geological disturbances on the planet and the resulting tsunami.

The season does have a few weaknesses. The source material is probably the weakest book in the series (although still a pretty solid book) and the TV show can't quite overcome the fact that events are constrained to one setting. After seeing the much busier Abaddon's Gate adapted in just seven episodes in Season 3, it feels like giving ten episodes to Cibola Burn was a bit generous, even with the other storylines added to bulk things out. The pacing is therefore not quite as gripping in previous seasons. Another issue - one more for book readers than viewers - is that the show decides to spell out Marco Inaros' masterplan in the closing moments of the series. Given that the events alluded to are essentially The Expanse's "Red Wedding" moment, more effective when shocking, spoiling this ahead of time is a questionable move. We'll have to wait until next year to see if this move pays off in Season 5.

Despite some minor quibbles, the fourth season of The Expanse (****½) remains an excellent show with fine performances, great scripts and impressive effects. The move to Amazon hasn't hurt the show at all and whets the appetite for what will be possible next year. The season is available to watch now in the UK and USA.
Posted by Adam Whitehead at 12:13