Valyrian Steel signs merchandising deal for THE WHEEL OF TIME

Valyrian Steel, who rose to fame creating replica weapons for George R.R. Martin's Song of Ice and Fire novels, have signed a new licensing deal with Sony Television related to their Wheel of Time TV show (which will air on Amazon Prime). 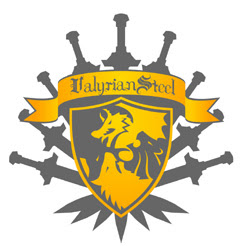 The new deal allows Valyrian Steel to create replica weapons, jewellery, armour, statues and replica angreal (magical artifacts which play a key role in the series), based on the designs that will be used in the TV series.

According to the press release, Amazon are currently musing a late 2020 airing date for The Wheel of Time, which is earlier than expected. There's also some correlating evidence for that which I will deal with in a separate post.
Posted by Adam Whitehead at 14:33