Alana and Marko were born on different sides of the devastating war between Landfall and its satellite, Wreath. The war rages across the galaxy, consuming world after world, with no official contact between the two sides. But Alana and Marko have, somehow, become lovers and had a child, Hazel, showing that more than just coexistence is possible. This has made them the most dangerous, wanted fugitives in the galaxy and dozens of skilled hunters and assassins are on their tail. 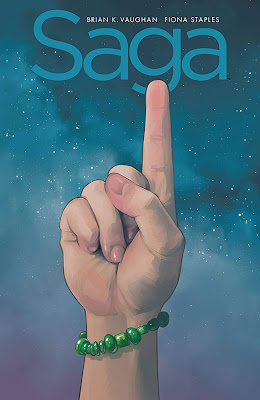 Saga is the story of a girl named Hazel, who is born and grows up under decidedly unusual circumstances. This small-scale story is a window into a much larger and more epic...well, saga. It takes in androids (here depicted as humanoids with televisions for heads), assassins, lie-detecting cats, sex, magic, guns, wooden spaceships, drugs, superheroes and cyclopses. There's so much going on in Saga that it's impossible to convey its sheer scope succinctly.

The comic book's writer is Brian K. Vaughan, late of Y: The Last Man, Paper Girls and his work in television (on Lost and Under the Dome) and its artist is Fiona Staples (also responsible for a recent Archie relaunch). Both had reasonable careers before Saga, but it does feel like this is the project that both had been waiting for, something to take both their careers to the next level. Vaughan's writing is relaxed and confident (some of the misjudgements in tone that plagued early Y are here absent) and Staples' artwork is brimming with character and colour. The combination of the two is potent, resulting in a gripping and page-turning experience.

Saga is a family saga first and foremost, as we see Hazel being raised by her parents: Marko, a pacifist who keeps being forced back into violence and Alana, a rebel without a cause who has suddenly found one (and then two). The cast expands slowly, bringing in Marko's parents, a ghost-turned-baby-sitter, two reporters, a trashy romance author and a lot more besides. The story also follows the lives of several antagonists, most notably the bounty hunter known as the Will (and his companion, the meme-generating Lying Cat) and the noble, mildly psychotic android nobleman, Prince Robot IV. Over the course of these 54 issues the story twists and turns unexpectedly, all narrated with aplomb by the now grown-up Hazel.

This flashback device means that we know Hazel lives to see the end of the story, but everyone else is at risk. And really at risk. The series shows a George R.R. Martin Plus level of willingness to kill off established characters and bring in new ones at the drop of a hat. No-one is safe, which becomes increasingly clear as the series continues and long-running mainstays are dispatched, sometimes very unceremoniously indeed.

Whilst the story has a good line in carnage, it also has a great deal of heart. The series dwells a lot on the idea of family, not just biological but also accumulated, the lifelong friends we make along the way and those recurring people who keep showing up unexpectedly. Saga's grand science fantasy, war-torn backdrop is a compelling part of the experience, but the more interesting theme the series explores is that all of us - every single one - are the protagonist of our own personal saga, and how we live our lives determines how our roles will be seen by others: hero, villain, morally ambiguous bounty-hunter or bit-part extra.

Saga (*****) is a love story, a war story, a tragedy, a comedy, sometimes a vivid fever dream, often a touching story of family and childhood. It's an adult story about life, loss, literature and lovesickness. It's about the appreciation of fine boardgames and finer friends. It's certainly one of the best slices of science fiction and fantasy produced in this rapidly closing decade. Compendium One is available now in the UK and USA.

Note: Compendium One is meant to gather the entire first half of Saga into one (relatively) easy-to-read collection. The first 54 issues of the comic book are collected here, totalling 1,328 pages. Saga had previously been available as six-issue collections and larger hardcover volumes (each combining three collections), but this marks a good opportunity to jump aboard the Saga hype train if you haven't been sold on it so far. Compendium One is obviously huge though, and as a paperback-only release (for now) it puts a bit of a strain on the binding, which I can't see surviving too many rereads, especially if you're transporting it around. On that basis, the hardcover volumes which collect eighteen issues at a time (into still-chunky 400-page volumes) may be a better choice. It's also worth noting that Saga went on extended hiatus after issue 54 was released in mid-2018 and isn't due back until some time in 2020. From that point, it'll likely be another seven years until the series ends and another year or two beyond that before we get Compendium Two. More impatient readers might prefer to follow the volume format to get to the end of the story faster.
Posted by Adam Whitehead at 18:19