Dreamland is in a perilous state, with the population turned to stone by the machinations of the returned Queen Dagmer. Bean, oblivious to her mother's true nature, has travelled with her to Maru where she meets the rest of her family but also learns some of the truth of what is going on. It is up to Bean to rescue her friends, save Dreamland and defeat her evil mother. 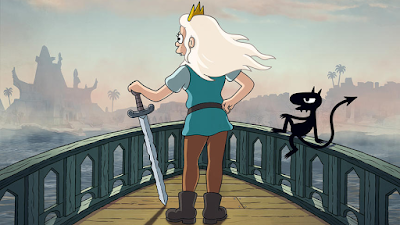 The first season of Disenchantment was a bit of a disappointment: Matt Groening bringing his trademark art style to bear on fantasy but failing to equal his earlier works (The Simpsons and Futurama) in the laughter stakes. Towards the end of Season 1, Groening and his writing team hit upon a different formula, one of mixing tragedy, comedy and pathos to achieve a better result. Fortunately, this upswing in quality continues through the second part of the first season (why this couldn't just be Season 2, I don't know).

This second batch of ten episodes initially focuses on resolving the Season 1.0 cliffhanger, with Bean learning the true nature of her family very quickly and escaping back home, where she has to undo the damage wrought by her mother. This includes a trip into Hell to rescue Elfo and an alliance with the elves to save the townspeople, in return for the elves being allowed to live in Dreamland's capital (or, more accurately, in a newly-established ghetto in the capital). All of this gives this batch of episodes more focus and narrative energy than the opening half of the season.

By taking a more serious tack - this batch of episodes riffs off issues like colonisation, interracial families, mid-life crises and racism - Disenchantment oddly finds its own niche. This also helps the show, perhaps counter-intuitively, become funnier. Whilst it was rare for the first half of the season to do more than elicit the odd wry smile, the second half did trigger a fair few full laughs. I believe I even guffawed once.

The writing and characterisation is better in this second batch of episodes, although still not as good as it could be. Disenchantment's animated fantasy label-mate at Netflix, The Dragon Prince, is sharper, more dramatic and funnier (despite not being as overtly a comedy) and Disenchantment is never in any danger of matching it.

Season 1, Part 2 (seriously Netflix, sort it out) of Disenchantment (***½) is an improvement over the first season and is certainly on the right course to becoming a much better show, but for the moment it remains at best a diversion in a landscape filled with much stronger shows. Hopefully the improvement will continue through future seasons. The season is available to watch on Netflix now.
Posted by Adam Whitehead at 15:34

First I've heard of this called season 1.5 instead of season 2.

Officially it's Season 1, Part 2, which felt a bit too long. Netflix do this a lot, having just done the same thing to The Chilling Adventures of Sabrina and Voltron: Legendary Defender. They apparently tried to do it to The Dragon Prince but the creators weren't having it and just called each batch of episodes a discrete season.

Where does it say it's season 1.5? I did a search and this post is the only thing that came up as 1.5 instead of two.