On the 266th day of the 755th year of the 41st millennium, the Imperium of Man launched a full-scale invasion of the Sabbat Worlds: one hundred and sixty star systems with a combined a population of 17 trillion souls. Over the preceding two centuries, the region had fallen prey to the depredations of Chaos cultists and other followers of the Ruinous Powers. Over the course of the next thirty-seven years, the Sabbat Worlds Crusade would cost billions of lives but deliver trillions from the grip of the archenemy, through a combination of bold strategic ingenuity and desperate fighting on the ground, in the air and in space. A small but important role would be played by one company of the Imperial Guard in particular: the Tanith 1st, popularly known as "Gaunt's Ghosts." This is the story of the war on a grand scale. 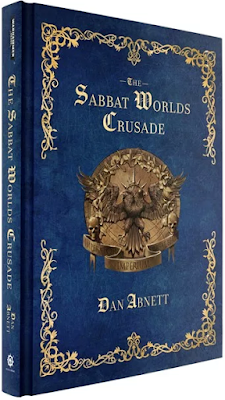 For the past twenty years, Dan Abnett's Gaunt's Ghosts series has been one of the most popular (and almost certainly the best) military SF series in the world. Its mix of effective characterisation and impressive military action has been highly compelling, effectively replicating the appeal of Bernard Cornwell's Sharpe novels but in the future, and in the Cthulhu-meets-Aliens milieu of the Warhammer 40,000 space fantasy setting. The Sabbat Worlds Crusade is the sub-setting for these books, effectively a corner of the wider 40K setting which Abnett has made his own, depicting a vast war on a mind-boggling scale.

Despite the detail and attention poured into that war, it has remained firmly in the background. Abnett has instead correctly focused on the events and characters up-front in the novels, making them compelling reads with the background material interesting but not essential to enjoying each book in turn. Over the years the background has gotten fleshed out, via two short story anthologies and a previous companion book published when the series was barely half its current length. This book is a reprinting of the previous companion volume but on a much grander scale, with all-new material on the latter half of the war bringing the story up to date as of the fifteen book in the series (Anarch).

The first thing to note is that this book is a thing of beauty. It is hefty, published on high-quality paper and features a colossal amount of high-quality artwork from the talented art department at Games Workshop. Some of the artwork is reprinted from previous book covers, but a lot of it is new, most notably a handsome (if somewhat stylised) fold-out map of the entire Sabbat Worlds region. The book also features a ribbon book mark and the pages are edged in gold, making it a handsome volume for your shelf without completely destroying your wallet.

The text is mostly a linear account of the war, opening with the causes of the conflict and the deep-seated historical background before focusing on the politicking of Warmaster Slaydo to get the war approved and underway. The opening stages of the war to the decisive battle at Balhaut are recounted in detail, before Slaydo's death and the rise of the far more mercurial and temperamental Warmaster Macaroth to replace him, which coincides with the rise of Ibram Gaunt and the Tanith First and Only, as recounted in the novels. The book then continues to outline the course of the war, through events readers of the main novel series will be familiar with and other battles that have never been mentioned in the books.

Something I was very impressed by is that Abnett doesn't fall into the common companion volume trap of making the book a redundant retelling of the events of the books. This is the very thing that Raymond E. Feist did in his Riftwar companion book, Midkemia: The Chronicles of Pug, neglecting previously unknown lore in favour of telling the reader a story they'd already read and making the entire project redundant. You've already read the novels, you don't need to read a summary of them again. Abnett instead focuses on other theatres of conflict and other battles, mentioning the Ghosts only in passing when their activities have a discernible impact on the overall course of the war, which is surprisingly limited. That's not to say the Ghosts are ignored though. Sidebars and chapters on weapons, vehicles and kit feature the Ghosts prominently, many of whom get their first official artistic depictions in this volume.

The writing is pretty solid, although your investment in it will depend on your enjoyment of detailed military accounts of completely fictional campaigns. There clearly isn't much character work going on here, Abnett relying on the reader's familiarity with the novels and a few sidebars fleshing out commanding figures in the campaign. There is some interesting stuff for future books though, with one account of a major aerial dogfight feeling like setup for Interceptor City (the much-delayed sequel to Double Eagle, Abnett's Battle of Britain-aping dogfight novel), and the final chapter setting up the next and final phase of the Crusade, the battles that will no doubt feature in the final arc of the Gaunt's Ghosts series, although that's still a few years off.

Amongst companion books, The Sabbat Worlds Crusade (****½) is very decent. It gives the reader lots of new information and puts the events they are familiar with in a new context. It provides setup for future books and features a lot of fantastic artwork. The production value of the book is exceptional and it certainly makes for a very impressive gift for a fan of the novels. Negatives are pretty minor: you're not going to get much out of this if you haven't read the novels (natch) and some may bemoan the lack of a further level of detail (like full orders of battle, although these can be found in the entries on the crusade in the various 40K wikis) or summaries of the novels (again, these can be found online). Some may also question the wisdom of publishing this volume now rather than when the series is fully complete, especially since only four to six novels appear to remain in Abnett's plan for the series.

The book is available now from the Black Library.
Posted by Adam Whitehead at 13:29