May, 1983. Ex-IBM sales executive Joe MacMillan joins Cardiff Electric, a software development company based in Austin, Texas. MacMillan has a remarkable ambition, to develop a PC that is a direct competitor to IBM. He recruits hardware engineer Gordon Clark and BIOS programmer Cameron Howe to help in the project, which soon involves cloning IBM's software (risking legal action in the process) and developing sophisticated and expensive new technology which threatens to bankrupt the business. But Joe's ambition will not be thwarted by costs or practicalities. 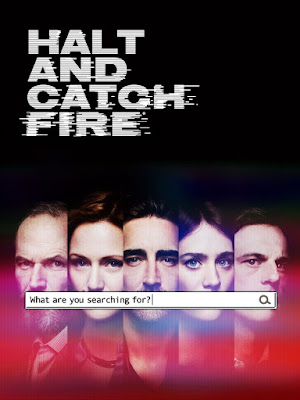 Halt and Catch Fire is almost certainly the most underrated drama series of the 2010s. Airing to small audiences on AMC, it completed its four season run by dint of being relatively cheap to make and to the critical kudos it picked up during its run, from 2014 to 2017. In the years since it went off the air, the show has picked up a lot more critical retrorespect but still hasn't quite permeated the audience consciousness even in the same way as, say, The Americans or Atlanta.

The show's relatively dull-sounding premise doesn't really help it. This is a period piece about the early (ish) days of the computer business, which doesn't really sound like the most exciting basis for an ongoing TV show. The cast is perhaps a bit more interesting. Lee Pace, hot off the press of playing Thranduil in Peter Jackson's Hobbit trilogy and Ronan the Accuser in Guardians of the Galaxy and poised for a big Hollywood movie career, signed up to Halt and Catch Fire after working on those projects, a sign of his regard for the scripts. Mackenzie Davis was less well-known before working on the show, but it certainly helped her career develop, with roles in Blade Runner 2049, Terminator: Dark Fate and arguably Black Mirror's most popular episode, San Junipero, all following.

The first season of Halt and Catch Fire starts off feeling a bit more like Mad Men but in the 1980s with more computers and less advertising, with Pace's smooth advertising exec Joe MacMillan coming across like Don Draper with added bisexuality. The show rapidly moves away from that, instead leaning into more of a slightly offbeat tone that gets more pronounced and more interesting through the show's run, becoming a bit more of an 8-bit Mr. Robot. It never goes as full intense-weird as that show though, remaining grounded throughout its run. It's this tone of being a traditional drama but with one tone in the oddball, accessible but occasionally weird, that makes the show interesting.

The performances of the four leads make the show work. Joe is smooth, slicked back and confident, but masks a more troubled family background and issues with commitment. Pace finds additional layers of the character which make him more relatable although not always sympathetic: Joe is a seriously damaged human being and it's to both the writers and Pace's credit that they avoid slipping into cliche. Scoot McNairy provides an able foil in the role of Gordon, a more hands-on practical engineer and family man who lacks Joe's big picture vision as he is more of a details guy. Kerry Bishé provides excellent support as Gordon's wife Donna (the two re-teaming as a husband-and-wife couple from the movie Argo), whose character rapidly expands from that of supporting character to co-lead. The show flirts with traditional relationship drama when delving into their marriage but expertly finds new ways of exploring the oldest of relationship ideas in the show. The central quartet is rounded out by Mackenzie Davis's Cameron, a loose cannon genius programmer with commitment and addiction issues who at first might make the viewer wince due to being a walking bag of tropes, but rapidly becomes a far more interesting character thanks again to the writers and Davis finding extra depths in the role.

At just ten episodes, the first season moves relatively quickly and presents our protagonists with fresh challenges every week. The stakes feel kind of low overall - at no point in the series is anyone's life in danger, for example - but the financial implications for the company and the people who work there are ramped up and the show makes it clear that the livelihoods of hundreds of people are on the line.

Events come together and it feels like the ending might be a little too neat, probably a result of renewal not being seen as certain (or even likely, for such a niche premise). But fortunately Halt and Catch Fire did gets its later seasons, which number among some of the finest of the decade. This first season (****) is a slow burner but rewards the patient viewer. It is available to watch now on Amazon Prime in the UK and USA.

It sounds as though you've seen the whole four season already? That was quick!

As I say, I enjoyed the first season, perhaps because I'm part of the very small demographic for whom "drama about 1980s computer technology" is actually a really appealing concept*, but for me it only really comes together - we only really get a sense of what the show is going to be - when they get to Comdex and (minor spoiler!) we see the Mac, and seeing the Mac makes us, and them, realise what Cameron was talking about.

But in a way, all this feels like the orig... huh. Come to think of it, each season of HACF kind of feels like the origin story for the next season. Which I guess sounds kind of fatuous and obvious, but also I think is a big part of what makes it feel different, to me, from almost any other show. It's not a show that just establishes some characters and a situation and we run with that to the end - instead, each season almost reintroduces us to people who have become quite different people, and the previous season just, as it were, provides the backstory to explain who they are now. Until by the end, the characters and their relationships have so much history behind everything they do that everything becomes more meaningful, and we can no longer think of them in simple terms like 'friend', 'enemy', and so on.

Sorry if I'm wittering. S4 of HACF is one of my favourite seasons of anything ever.


[and yes, while I think it ended up great because of the writing, I think it survived to get great because of the wonderful performances. Davis in particular turns Cameron Howe from a derivative, scraping-the-barrel walking cliché into something that feels like the archetype of that cliché, not a copy but the perfection of the whole idea of that character. Pace turns Joe from a gimmick into a complicated man. Bishe... well, without her, Donna would just have been 'the wife' and never more than a supporting role. And McNairy anchors it all in a rather understated way as Gordon, a role that's both distinctive and an everyman - convincingly smart enough that, just occasionally, you realise how dangerous he can be if he gets his shit together, and simultaneously convincingly foolish enough that at other times he seems to barely be holding it together.

In particular, the actors walk a very narrow line in making Cameron, Gordon and Joe in particular (Donna in later seasons) really, really objectionable, insufferable people, while being charismatic enough that the audience still loves them.


It's also all such a great period piece, particularly later as we almost physically feel the transition from the early eighties to the late eighties into the early nineties. And this is what that period was. In history, the eighties and the nineties won't be the period of yuppie bankers and desert storm, mining strikes and back to basics. It'll be the period in which computers rose from parlour curiosities to be the centre of the world, and the internet was born. That's the story of the age, and I suspect it's a story that's only going to be told more often as our own generation and those that follow question how their world came to be.

And as a period piece, it's a great companion to The Americans; for much of their run-time, the two shows were being created simultaneously, and discussing exactly the same time-period (likewise Stranger Things...), both in a faithful and evocative way. But The Americans is, effectively, about the death of the old world, and Halt and Catch Fire is about the simultaneous birth of a new one.

*my father and uncle both worked in computing in the early 1980s. Both of them, in different ways, are painfully Gordon at times...

Bang on write up. One of the best shows of the last decade. Fun fact is that the show's company Cardiff Electric is loosely based on a real world company Compaq.

Point being there are so much good PC history in this show it also really appeals to PC geeks. Old school dial up Modems, BB's, hacking, coding etc. Let's not forgot it has great 80s songs that fit the scenes well.

Wonderful show. We loved watching things like social media and on-line shopping dawn on the characters. We tried to guess as each trend arose: "That's Amazon!"