Aang decides to celebrate a festival in honour of Yangchen, the previous airbender Avatar to himself. However, he discovers that the holy site dedicated to Yangchen is now the site of a town. The town is prosperous but also dirty thanks to a factory outside of town. Aang's disgust with the holy site being defiled is contested by Toph, who points out that the people - a mixture of Fire Nation colonists and Earth Kingdom nationals working side-by-side to build a prosperous community - are in fact representing the very thing Aang is trying to build. As Aang struggles to contain his anger, the town comes under threat and it's up to a divided Team Avatar to save the day. 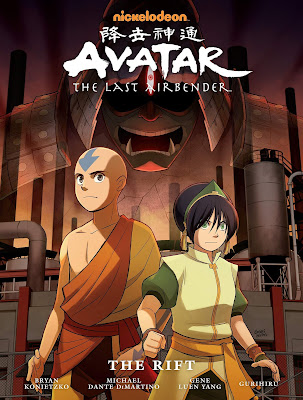 The first Avatar: The Last Airbender graphic novel, The Promise, was a pretty solid story exploring colonialism and how politics can tear families apart. The follow-up, The Search, was more focused on the mystery of Zuko and Azula's missing mother, but couldn't sustain its length and fell prey to filler. The Rift is fortunately more of a return to form.

The graphic novel gets off to a good start by seeing the return of more of the Avatar Team, with Toph front and centre for the action (and even getting her first romance). The story feels a lot more Avatar-ry as well, with Aang communing with Yangchen's spirit to learn more about her life as an Avatar and this tying in well with the main storyline. We're also getting a lot of set-up for The Legend of Korra, with the first example of a factory running on earthbending and firebending and the rate of technological progress in the Avatar world proceeding apace, with the first motorised vehicles starting to appear. We also get some good fight scenes.

As with The Promise, the story is given added depth by the presence of a genuine moral dilemma, with Aang unhappy with the town being built on a sacred site and polluting the environment, but also happy to see people of different backgrounds working together to build a better world. The problems of blind faith and venerating the old just because it's old are also highlighted, with Aang admitting that he doesn't know the significance of Yangchen's ceremony until he communicates with her in the spirit world.

The Rift (****) isn't quite as strong as The Promise, which had a better supporting cast of characters and more material for Zuko (who sits this one out), but is a nicely-paced, enjoyable story that answers the call for more Avatar stories. IT is available now in the UK and USA.