With political tensions between the Fire Nation and Earth Kingdom eased for now, Fire Lord Zuko embarks on the most important quest of his life: to find the truth of what happened to his mother. Unfortunately, the only two people who can help him in his quest are his insane sister Azula and his deposed father, Ozai. Zuko reluctantly has to trust them if he is to learn the truth. 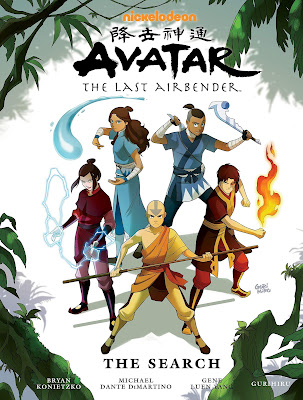 The first Avatar: The Last Airbender graphic novel, The Promise, was an unexpectedly weighty story about colonialism and imperialism, whilst also incorporating the fun characterisation from the TV show. The Search has even greater promise, as Zuko's burning desire to find out what happened to his mother is the most prominent story left dangling from the TV show.

Unfortunately, it doesn't work anywhere near as well. Partly this is down to the much smaller cast of characters (even characters in the book keep mentioning how much they miss Toph) and also the decision to incorporate Azula into the main team. Redeeming Azula is not a bad idea - it was even Avatar head writer Aaron Ehasz's main idea for a potential fourth season of the show - but the book doesn't really try to do that. Instead Azula is just crazy-whacky with some lightning control issues, a schtick which gets old way too fast.

The Promise also justified its 200+ page length with multiple subplots and character arcs, even for minor recurring roles. The Search, which is the same length, does try to do the same thing by incorporating a lengthy flashback story, but there isn't enough meat on the bones. It turns out the story of what happened to Zuko's mother is fairly straightforward (with an excellent callback to one of Aang's earlier adventures) so the mystery doesn't quite justify the length of the story.

That doesn't mean there isn't some fun in seeing the characters develop and the team go out on another adventure. There's some good writing (Gene Yang has a good ear for the voices of the characters from the TV series) and Team Gurihiru's artwork is pretty good, but the story is definitely a bit thinner this time around. The Search (***½) is available now in the UK and USA.
Posted by Adam Whitehead at 22:30