Sterling Archer and his team of former anti-terrorist secret agents are now jobless, both their private security firm and attempts to work for the CIA having ended in failure. Relocating to Los Angeles, they set up a private detective agency and are soon embroiled in a complex mystery involving a Hollywood starlet and a movie set hiding a lot of secrets. However, Archer finds himself in over his head and a shocking reversal leads him to three very strange places indeed... 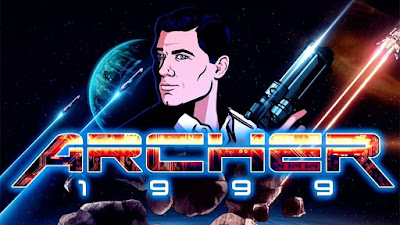 The first six seasons of Archer saw the titular agent and his back-up team at private security firm ISIS (hurriedly renamed and then removed from references for fairly obvious real-world reasons) getting into scrapes and hijinks against an ambiguous historical background. Season 6 was the final one for the "classic" Archer set-up, with the crew working for the CIA directly against hostile foreign powers whilst getting into their standard inter-team banter. Season 7 moves the team to Los Angeles and a private detective agency setting, which works well but also feels a little too reminiscent of Season 5's Miami-set "Vice" season.

At the end of Season 7, however, the show takes an abrupt turn for the surreal. Archer is shot and falls into a coma; the subsequent three seasons unfold entirely in his mind (shades of classic British genre shows Life on Mars and Ashes to Ashes) with the regular cast re-conceptualised each time. Season 8, subtitled Dreamland, sees the team in 1947 LA and riffing off classic film noir tropes. Season 9, Danger Island, puts the team on a tropical island. Season 10, Archer 1999, is set in the future with the regular team now crewmembers on a starship.

For a show to completely rejig its premise like this and for so long is remarkable, perhaps even unprecedented. Archer was so firmly immersed in the world of spies, espionage and modern pop culture references that yanking the show completely out of it and forcing it into areas away from its comfort zone feels unsettling, but also extremely brave and, when it works, quite inventive. For any show, six seasons and 75 episodes in one milieu is more than enough, so to switch to a new approach helps in keeping the show fresh.

Or at least it should. Truth be told, these latter four seasons of Archer are a mixed bag. Season 7 feels very much like a reheated version of Season 5 and very little of the season's storylines or characters have remained memorable. Fun to watch in the moment, but a little too reliant on running gags. The three "concept" seasons are all better, and there's a lot of fun seeing the characters reimagined in new situations. However, the characters quickly fall back into their more familiar roles and a lot of the running gags and repetitive character tics from earlier seasons return. There's no denying that the "high concept" idea does inject fresh energy to the show at a moment when it was running out, but it doesn't solve all of the problems.

Of the three high concept seasons, Archer 1999 is by far the best. Putting the team on a spaceship is a brilliant idea and allows the writers to bring in a lot of new concepts that they couldn't touch previously. It features some of the best laughs since the show's early seasons, with Mr. Deadly Goes to Town (starring the incomparable Matt Berry as the titular Mr. Deadly, a sentient bomb who just wants someone to detonate him) being a stand-out moment. Danger Island is okay, but it feels like we visited a lot of these ideas in previous seasons when Archer had to go to exotic locations to undertake one-off missions. Dreamland has a lot of promise but the noir setting isn't really compatible with Archer's usually cynical and biting humour, so it does go to waste a little.

If the three high concept seasons don't entirely work as intended, they still help keep Archer (***½) fresh, and it's good to see that at the end of Season 10 the idea is put to bed permanently. Season 11 should see the return of the "real" world and Archer catching up with everyone over what has happened in the past three years should hopefully result in a more interesting show. The series airs on Netflix in the UK and FXX in the United States.
Posted by Adam Whitehead at 15:09