In highly unexpected news (well, before rumours started circulating a week ago), Valve have confirmed that they have all but completed work on a third full-length video game in the Half-Life series and will be releasing it in March. In less welcome news, the new game is not the long-awaited Half-Life 3 but will instead be an interquel, set between Half-Life and Half-Life 2, and will only be available as a VR title.


Half-Life: Alyx is approximately the same length as Half-Life 2 (about 12-13 hours) and is a first-person shooter where the player controls Alyx Vance, a key supporting character from Half-Life 2 and its expansions, Episode One and Episode Two. The game is set in City 17, an Eastern European metropolis now under occupation by the alien Combine, with many of the alien structures seen in the previous games (including the massive Citadel) still under construction. The game sees the founding of the resistance group which plays a larger role in the other games in the series.

Half-Life (1998) and Half-Life 2 (2004) are two of the biggest-selling video games of all time, regarded as iconic titles for pushing first-person and physics technology forward and featuring atmospheric, organically-told stories that mixed action and horror. However, Half-Life 2: Episode Two (2007) ended on a massive cliffhanger which has not been resolved in the twelve years since release, with Valve occasionally insisting they were working on a Half-Life 3 but never confirming a release date. Valve have made two spin-off games set in the same universe, Portal (2007) and Portal 2 (2011), but nothing since then. Several key creative personnel from the Half-Life franchise have left the company since then, one of them publicising a story document confirming where a third game might have gone, story-wise. 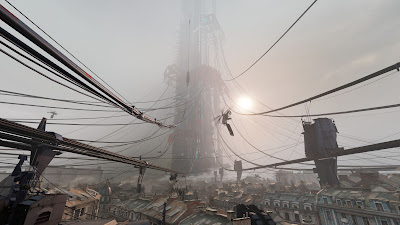 Half-Life: Alyx will be available exclusively as a VR game on PC, via Oculus Rift or any other compatible VR technology. The game will not be available to play on standard hardware, although Valve have acknowledged that modders will probably try to make it work somehow. Valve are keen to push VR technology to the masses and feel it has stalled over the last year or two after a promising start, so have gone all-out to make the first VR game which is a full-length title and makes every possible use of the technology. However, according to some hardware surveys only 2-3 million people worldwide have VR hardware in the home, which severely limits the potential customer base for the game.

More interestingly, though, the game means that a huge number of assets from Half-Life 2 and its expansions have been upgraded and ported to the Source 2 Engine, making a remastered version of Half-Life 2 now much more likely and possible. Some commentators have also pointed out that development of Half-Life: Alyx must have cost tens of millions of dollars and it would be insane even for Valve to do that with little or no chance of making that back.

Half-Life: Alyx might be an interesting and fascinating demonstration of what VR can really do, but it may be much more important in showing that Valve actually do want to continue making stories in the Half-Life universe and now have the technology and commitment to doing so.
Posted by Adam Whitehead at 19:34