Tim Goodman, a former Pokémon trainer turned disillusioned young insurance salesman, is called to Ryme City after the death of his estranged father. However, he bumps into his father's former Pokémon partner, Pikachu, whom only he has the ability to talk to. With Pikachu's help, he learns of a shadowy conspiracy and the possibility that his father may still be alive... 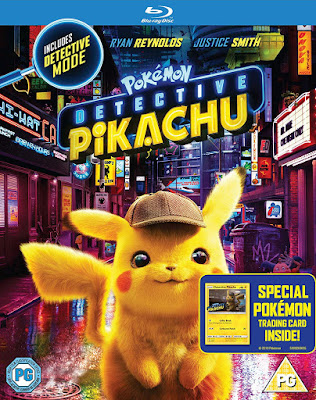 The Pokémon phenomenon is one that mostly passed me by, although I was certainly aware of it: I was working retail in the fateful Christmas of 1999 when the toys, video games and perennially-out-of-stock card game landed and still have flashbacks to the time. I never really got into the fiction of the game. I was, however, intrigued by the trailers for Detective Pikachu. The concept seemed crazy and I always have time for Ryan Reynolds doing his thing.

Detective Pikachu is something of an unexpected pleasure. It's a very traditionally-structured movie with a hero's journey, redemptive arc, a fair bit of CG action and some moral lessons along the way, but it's all executed extremely well. It's the cinematic equivalent of a comfortable pair of slippers. It's predictable (well, mostly, there's a couple of nice twists), cosy and not going to surprise you too much, but you enjoy the heck out of it anyway.

Ryan Reynolds, of course, steals the show as Pikachu. His vocal performance is impeccable and he imbues the little character with some real warmth and charm. There's a few moments when it feels like things are starting to go a bit Deadpool, but Reynolds rains it in and mostly keeps Pikachu feeling like his own thing rather than a non-sweary, less-meta version of the merc with a mouth. Other performances are very solid, especially Justice Smith as the lead character Tim and Bill Nighy as multi-billionaire Howard Clifford.

The film is also very welcoming to Pokémon newbies, with just enough exposition given to let people know what the creatures are and how they evolve before getting on with the story. The film rewards both newcomers and veterans of the franchise. I was also pleasantly surprised that whilst the movie has a fair bit of CGI, it doesn't go completely mad with it, restraining its use for the creatures and the larger action sequences.

There are a few negatives. Ken Watanabe has almost nothing at all to do and I was a bit puzzled why they cast an actor of his stature and then failed to give him a story arc. Kathryn Newton as Lucy is also very good, but pretty much disappears in the denouement. It feels like a lot of her story was left untold, which is a shame.

Broadly speaking though, Detective Pikachu (****½) is undemanding, knockabout fun, a standard story told with some skill and heart. It won't reinvent the wheel but it's a solid way of passing the time. The film is available now in the UK and USA.
Posted by Adam Whitehead at 15:36