Gods of Jade and Shadow by Silvia Moreno-Garcia

Mexico, 1927. Casiopeia Tun lives in her uncle's house, where she is treated as little better than a servant. She is demeaned and belittled by everyone, especially her cousin Martín. Casiopeia's fortunes abruptly change when she finds a trunk in her uncle's bedroom which is actually the prison of a powerful being: the Mayan God of the Dead Hun-Kamé. Casiopeia is unwillingly roped into becoming the god's guide and mortal helper as he seeks to find the body parts and treasures removed by his usurper brother...who now sets Martín on Casiopeia's trail. 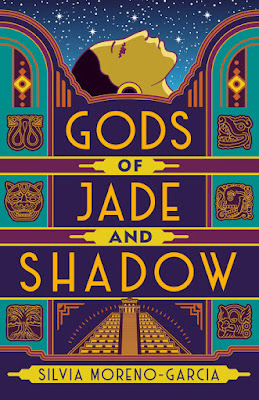 Gods of Jade and Shadow is the fourth novel by Canadian author Silvia Moreno-Garcia, a heady period fairy tale which embraces Mayan mythology, the Jazz Age of the 1920s United States and Mexico and combines them into a richly compelling adventure.

The novel is effectively a road trip: Casiopeia gets to flee her abusive home, which is good, but only because she's been roped into helping a manipulative and dark god into helping him reclaim his throne, which is less good. As the story unfolds, the link between Casiopeia and Hun-Kamé becomes more pronounced, causing the god to become more human and less infallible, but also more capable of appreciating the beauty of the mortal world.

As well as the road trip element, the story is also one about family: Casiopeia despises and hates her family, but it's also the only world she's ever known. Hun-Kamé was betrayed by his brother and yearns for blood and vengeance, even though it will only perpetuate the cycle of hatred that has led to this impasse. The novel does a great job of contrasting the development of the two characters as they grow from their shared experiences, even the one of them who is an immortal.

The book reminded me somewhat of Neil Gaiman's American Gods, although in this case the novel benefits from a much tighter focus on a much smaller cast and on the Mayan mythology alone (and only being around half as long). The interaction of gods and mortals in the almost-modern world is intriguing and there's a galaxy of vivid supporting characters, humans, gods and demons alike, such as the amusingly mischievous Loray (who it feels could get his own spin-off book).

The book unfolds with verve and grace: at 330 pages it doesn't hang around and the story is related at a clip. At times I felt the book was too fast: the page count doesn't quite allow the author to fully explore the characters and their moral situations they find themselves in and also relate all the necessary mythology-building. Again, it feels like more could be done with this world, although the author sounds reluctant to embark on a sequel.

Gods of Jade and Shadow (****) is a enjoyable, gripping novel with a strong, small cast of characters and which unfolds with skill and pace. It is let down a little by being slightly too short and not perhaps being able to fully explore all the elements of the story and worldbuilding, but it's still a fun, compelling read. The book is available now in the UK and USA.

Email ThisBlogThis!Share to TwitterShare to FacebookShare to Pinterest
Labels: gods of jade and shadow, silvia moreno-garcia