Netflix's live-action remake of acclaimed Nickelodeon animated series Avatar: The Last Airbender is to start shooting in February 2020. The news came courtesy of Avatar voice actor Jessie Flower, who played Toph in the original animated series, after she teased it from the showrunners. It also sounds like the original voice cast may be up for cameo roles in the live-action series. 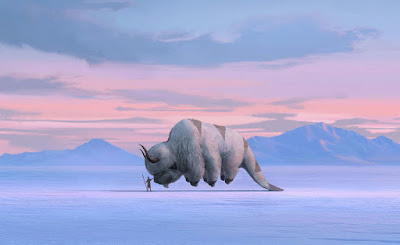 Avatar: The Last Airbender is set in a world whose politics and magic are divided between the four elements: water, earth, air and fire. The world has gone out of balance since the Fire Nation started a devastating war against the other three kingdoms, defeating the Air Nomads and invading the massive Earth Kingdom. The best hope for peace lies with the Avatar, the one person in the world who can channel or "bend" all four elements simultaneously, but he disappeared a century ago. The story begins when two members of the Southern Water Tribe, waterbender Katara and her non-magic-using brother Sokka, find the Avatar - an airbender named Aang - frozen in an iceberg. Awakening from his slumber, Aang sets out to save the world...but needs some help along the way.

The original animated series was acclaimed for its animation, character and environment designs, its writing and strong characterisation, which helped it win an Emmy and a Peabody Award. The show ran for three seasons and 61 episodes from 2005 to 2008, and was followed by a sequel series called The Legend of Korra (2012-14). There have been numerous graphic novel and comic spin-offs.

A February 2020 start date suggests that the series may not air until early 2021. It's unclear if Netflix are envisaging a three-season run for this version of the show as well, or if they will be greenlighting two seasons at once to minimise downtime between seasons (essential in this case given the young age of the cast).

The animated series creators and showrunners Michael Dante DiMartino and Bryan Konietzko are also working on the new show as the main creative leads.
Posted by Adam Whitehead at 14:13