The Resurrectionist of Caligo by Wendy Trimboli & Alicia Zaloga

Roger Weathersby was once a promising surgical student but he is now a "resurrectionist," a corpse-stealer who takes the recently interred to medical schools to further the cause of science. One such incident leads Roger to investigate a spate of similar deaths and rumours of a serial killer at work. Roger's investigation sees him framed as the serial killer. It falls to his brother and Sibylla, a princess of the realm, to help clear his name and allow him to find the true murderer. 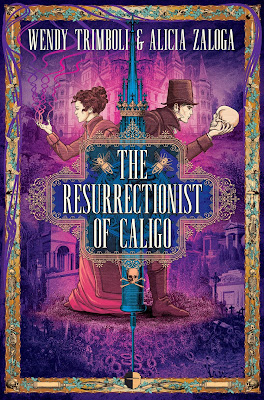 The Resurrectionist of Caligo is the joint debut novel by Wendy Trimboli and Alicia Zaloga. It mixes elements of Gothic fiction, steampunk, Victoriana and outright secondary world fantasy, with moments that recall China Mieville but an atmosphere all of it own.

I hadn't heard of the novel prior to randomly wandering into the book's launch party at the Dublin WorldCon in August, and was intrigued enough by the premise to pick the book up. It's proven to be an unexpected delight, a compelling novel with one of the most standard plots you can imagine - an innocent (but not flawless) protagonist framed for a crime he didn't commit, with him and his colleagues trying to clear his name - but set in a vivid and interesting world.

The book engages with a variety of themes across its length. Class struggle is a key point: the rich and powerful get the best medical attention and the best protection whilst the poor are left to suffer and die without acknowledgement. Class responsibility also comes into play: the nobles of the country of Myrcina (of which Caligo is the capital) are shocking arrogant and feel they have no obligations to their servants, whilst the neighbouring empire of Khalishkha has a very different attitude. Myrcina is also sexist and backwards, again whilst Khalishkha appears to be more enlightened.

The novel is told entirely from two POVs. Roger is a surprisingly unsympathetic protagonist. He is arrogant, overconfident, embittered and has enough chips on his solider to open a restaurant. He is also intelligent and principled, and his real plight is powerfully realised in the prose. The authors take a risk making Roger an at times difficult-to-like lead character, but it gives him a more discernible personality and also creates a more interesting arc for character change and growth.

Sibylla is an altogether more interesting protagonist with more agency, despite her station (as several steps removed from the throne) and gender working against her in this world. Watching Sibylla negotiate delicate matters of state and international diplomacy is fun, as she has a lot more charm, wit and finesse than Roger, whose approach is often more of a bull in a china shop.

The book also features some pretty good worldbuilding. Caligo is depicted in all its glory, a city of dimly lit cobbled streets, back-alley gangs and eerie mausoleums, as well as colourful palaces and dingy gaols. The wider world is also described in more detail than expected, with plenty of references to historical events and personages. As a result, the book feels part of a larger tapestry, one that the ending suggests we will get to see more of (a sequel is implied, but not necessary).

The Resurrectionist of Caligo (****) is a superb debut novel, well-written and compelling with fascinating characters and worldbuilding. If it has a weakness, it's that one of the two protagonists can be a little grating and the book can't quite avoid a couple of cliches along the way. But the prose is great, the pacing brisk and the storytelling accomplished. The book is available now in the UK and USA.
Posted by Adam Whitehead at 16:02