Disney have confirmed that its new streaming platform, Disney+, will arrive in the UK on 31 March, some four months after its US launch. Germany, France, Italy and Spain will get the service on the same day. 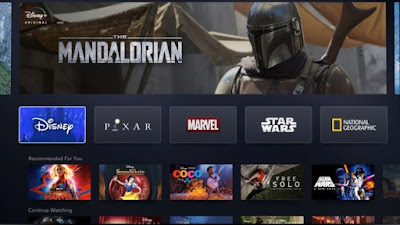 The delay in launching is apparently down to the complex rights situation. Disney is reverting the rights to its programmes and films held by numerous companies across the world and moving them onto its own platform. However, domestic and international rights are held by different companies, expiring at different times, so Disney+ UK will have a different line-up of shows and movies to Disney+ in the USA.

One thing it will have at launch is Disney+'s original content, in particular its eagerly-awaited Star Wars TV series, The Mandalorian. The platform will also launch with a host of legacy content, including numerous shows and films from the Disney, Pixar, Marvel, Star Wars and National Geographic back-catalogues, and will quickly be joined by material from Fox Television (which Disney recently acquired). Disney+ is intended to be a family service, so adult-rated material from those stables will not be available on the service, instead launching on sister streaming service Hulu in the United States. The fate of this material in the UK, where Hulu does not operate, is unclear.

More original content is coming down the pipe in 2020 and 2021, including a seventh season of Star Wars: The Clone Wars and multiple TV shows set in the Marvel Cinematic Universe and featuring the movie actors, including Falcon & Winter Soldier, WandaVision and Hawkeye.
Posted by Adam Whitehead at 15:20

Obviously a real shame that there will be so much of a delay for most of the world getting highly anticipated new shows.

What seems strange to me is why Disney don't put their new original content (The Mandalorian, etc.) onto their already established Disney Life platform in the UK. Surely there are no license issues there, and Disney Life is going to transition into Disney+ come March 2020 anyway. Seems an easy fix and I can't believe they haven't considered it.

We are lucky in Australia to get it next week as well. Big mandalorian advertisements on buses etc for the last few weeks

Audiences in Asia will have to wait two years to get Disney+ Which means I will have to resort to the Dark Arts to see what I want to see. - Ian