Into the Badlands: Season 3

The Widow and Madam Chau are engaged in a bloody war to finally determine who will control the Badlands. Sunny is living free in the wilderness beyond with his son, Henry. When Henry falls ill, Sunny is forced to reunite with his old allies to seek out a way of saving him. But Bajie's distress signal has attracted the wrong sort of attention, and an army of warriors imbued with the dark power invades the Badlands... 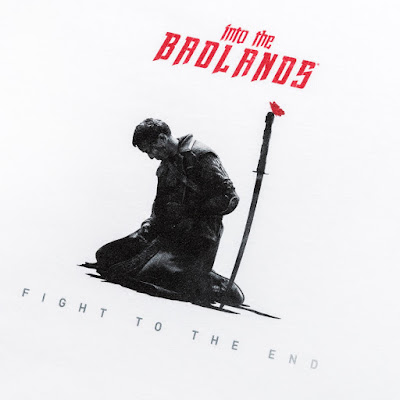 Into the Badlands may be the best-kept genre secret on television from the last few years. A post-apocalyptic fantasy inspired by the best of Hong Kong action cinema, it's not quite like anything else on air. It's a frenetic martial arts epic and now, unfortunately, it is over.

It goes out in style though. The third and final season is a chunky sixteen episodes in length and depicts a much broader, more epic story than previously. It focuses on a society at war but where hope is held alive by conviction and belief. The invading army, led by the aptly-named Pilgrim, are motivated by a prophecy, but it is unclear how reliable the prophecy may be. For the war-ravaged people of the Badlands, the Widow is trying to offer them hope of a better life afterwards, but until the war is won this vision cannot be delivered. For Sunny his task is more straightforward: he must survive and hopes to raise his son in a better world.

The scope of the series means that the pacing rarely flags (a much more serious problem for Badlands' increasingly tired AMC sister show, The Walking Dead), although the extra episode count does feel a little unnecessary. A few later episodes, heavy on flashbacks or sequences of characters being imprisoned and working out how to escape, do feel like they may have struggled to tell more worthwhile stories, but Badlands is pretty good at handling filler material. It uses it as a way of exploring added character depth or revealing more backstory, and sometimes quite inventively, so it wears the increased length reasonably well.

The third season also benefits from an improved set of villains. Marton Csokas' Baron Quinn was, how shall we say, a less-than-compelling villain and it was a relief to see him off at the end of Season 2. Babou Ceesay makes a more interesting antagonist as the newly-arrived Pilgrim, whilst promoting the recurring Sherman Augustus into a regular as Nathaniel Moon was a great idea, as he adds gravitas to the cast. A possible weak point is that the new character of Castor (Game of Thrones' Dean-Charles Chapman) feels a little underdeveloped given his heavy screentime in the early part of the season.

The returning cast all do great work, with the lead trio of Daniel Wu (Sunny), Nick Frost (Bajie) and Emily Beecham (the Widow) all being outstanding as normal. All three characters get a lot of development this season and more depth added. Lewis Tan is also a welcome addition to the core cast this season. The show also figures out what to do with MK (Aramis Knight) after two seasons of flapping around a bit with him, which is great news. Even better is that Orla Brady (Lydia), who had little to do in Season 2, has a much stronger storyline and presence this season, more fitting an actress of her calibre.

In almost every aspect, the third season of Into the Badlands is the best, with some of the finest storytelling, acting and action of the entire series. It is let down by a few minor issues. The violence in Season 3 does feel a bit more excessive than previously. Badlands has always had action, blood and carnage, but it's never really dwelt on it or been gratuitous in how it's handled. This season that's definitely not the case and there's a few scenes which do feel genuinely unpleasant. It's only a few scenes out of sixteen episodes, but it feels like a creative misstep (similar to the growing reliance on shock-gore in The Walking Dead from the midpoint of the series onwards) and takes attention away from the still-breathtaking fight choreography.

Into the Badlands' final season (****½) is a compelling, fast-paced pulp epic. It's well-acted, beautifully choreographed and has a genuinely enjoyable story. Some gratuitous violence and a few wheel-spinning scenes late in the season detract a little, but otherwise the series comes to a fine and worthwhile close. The season is available now in the USA and on Amazon Prime in the UK.
Posted by Adam Whitehead at 19:41

You said it twice, so for a moment, I actually thought there was a show called The Waking Dead. Hmmm, now there's an interesting premise.