Monstrous Development: The Controversy of BBC America's THE WATCH

BBC America are currently shooting the first season of The Watch, a new fantasy TV show based on Terry Pratchett’s Discworld novels, specifically the “City Watch” sub-series which begins with Guards! Guards! 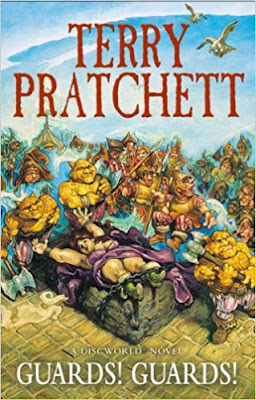 This is not the first time the Discworld has been depicted on-screen. In the 1990s it was adapted as three video games (Discworld, Discworld II and Discworld Noir) and two animated series from Cosgrove Hall, Wyrd Sisters and Soul Music. In the 2000s four of the books were adapted by Sky One in the UK as live-action dramas: Hogfather, The Colour of Magic, The Light Fantastic and Going Postal. The quality of these projects was “variable,” ranging from okay to disappointing.

The Watch is different. It has a far higher budget and it’s an ongoing show meant to last for multiple seasons. It aims to bring the city of Ankh-Morpork to life in detail and with a large cast of characters. What it is not planning to do, however, is adapt the books.

Instead, The Watch is “loosely inspired by” the novels and will instead create and tell original stories involving characters based on – to varying degrees of fealty – Pratchett’s characters, but not actually meant to be them. Based on the information we have so far, the storyline borrows elements from Guards! Guards!, Men at Arms and Night Watch, but will craft an original story by mixing and matching elements from those books together.

Fans are, it has to be said, baffled and increasingly angry over the direction the adaptation is taking.

This is not new ground for BBC America. In 2016 and 2017 they aired a two-season adaptation of the Douglas Adams novel series Dirk Gently’s Holistic Detective Agency. This was likewise “inspired by” the books, not a direct adaptation. However, in this case the “loose inspiration” idea made more sense. Dirk Gently has been adapted to the screen and to radio several times previously, so a direct adaptation was not really necessary and may have indeed been redundant. In addition, the show was being shot and made in the United States, so an all-new story set in the States (whilst keeping Dirk as a slightly mad Englishman) made casting a lot easier. The first episode even includes a namecheck of the events of the first novel, positing the TV show as a sequel to the books, although Dirk in the show is a much younger character and has a different backstory to Dirk in the books, but this is not an outrageous change.

Of course, that show got away with it because Dirk Gently is relatively obscure, only consists of two very short novels, has a small cast of characters (of whom only Dirk appears in the show) and is relatively thin on backstory, lore and worldbuilding.

Discworld, on the other hand, is one of the biggest-selling fantasy series of all time, with over 90 million books sold worldwide. It has an ardently passionate fanbase who have been waiting for an ongoing Discworld TV series for almost forty years, and its worldbuilding, backstory and cast of characters is utterly immense. Whilst Dirk Gently needed bulking out to work as a TV show, Discworld very definitely does not. 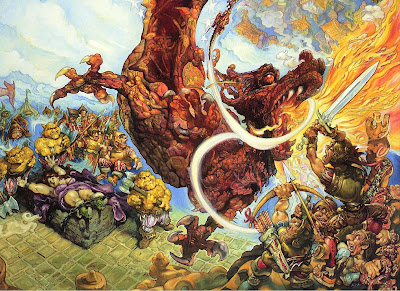 The City Watch of Ankh-Morpork are something of a joke, lacking real power and mostly just keeping themselves to themselves. Its commanding officer, Captain Sam Vimes, is a drunk who just tries to have a quiet life. The Watch are invigorated by the arrival of Carrot Ironfoundersson, a human raised by dwarfs who may also the long-missing, uncrowned king of Ankh-Morpork (something that interests him not at all). Carrot’s straightforward approach to dealing with crime – such as trying to arrest the head of the Thieves’ Guild – bemuses Vimes but also reminds him that his job has serious responsibilities. When a crazed religious cult unleashes a dragon on the city, it falls to Vimes, his motley crew of constables and a new ally, Sybil Ramkin, an expert on dragons, to save the city. When he succeeds, he is rewarded with more responsibility by Lord Vetinari, the Patrician of Ankh-Morpork.

Over the subsequent books, the Ankh-Morpork police force becomes a huge force for good in the city, stamping out crime, eliminating threats to the Patrician and ensuring order (to what degree this was unintended or part of a long-gestating masterplan by the infamously devious Patrician is open to question). Every time a threat arises, Vimes and his team are able to defeat it, if not without great cost. The City Watch becomes larger and more diverse, inducting vampires, zombies and trolls into its ranks, and helps the city become the thriving, semi-Victorian steampunk metropolis it is by the final few books in the series. 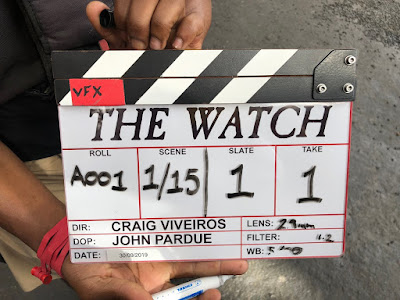 The TV Show
The information we have from the TV show is incomplete so far, but it does have several significant changes from the books.

The first is that many of the later recruits to the Watch are present from Day One: in fact, Cheery the dwarf and Angua the werewolf are already in the Watch when Carrot arrives. Angua is assigned to mentor Carrot and show him the ropes, which is a change from the books (where the reverse is true).

There’s also a curious line that “crime has been legalised,” which is not quite accurate. The Thieves’ Guild is licensed but has to operate within strict rules or face punishment. Freelance thieves and criminals remain illegal, so there’s still plenty for the Watch to do. This may have been a simplification of the plot in the books for a TV audience, or a sign of a major change to the worldbuilding.

In the biggest and arguably the most outrageous change, it’s been revealed that Lady Sybil Ramkin is no longer a formidable, somewhat rotund woman in early middle age, but now a younger, athletic “vigilante,” which has sparked some comparisons with Batman. Lady Sybil in the books is impressive as a character who operates within society rules but is also able to achieve results. She is also a rare example of a fantasy heroine who is middle-aged, not stunning attractive but still brave, capable and resourceful. Turning her into Batman in order to further "empower" the character feels derivative and lazy.

In a similar note, Cut-Me-Own-Throat-Dibbler, a street informant usually found selling dubious meat products to crowds watching whatever chaos is unfolding, has now been recast as some kind of intelligence agent with an army of freelance spies and thugs at his command, sort of like a working-class Varys from Game of Thrones. This is the absolute inverse of the repugnant character from the books.

Another concern is the publicity line confirming that the TV series will not be directly adapting any of the books but instead being inspired by them to create an original storyline. With the greatest of respect, this is always an act of stunning hubris by TV scriptwriters. The main writer of The Watch, Simon Allen, does not have a particularly distinguished CV, having written episodes of the BBC’s indifferent Musketeers show and light, disposable fare like New Tricks. I think it’s fair to say that he is not a good a writer as Sir Terry Pratchett, one of the greatest fantasists and satirists of all time. Thinking you can improve on Pratchett is extremely unwise.

It’s frustrating because the casting has, so far, been interesting. Richard Dormer (Ser Beric from Game of Thrones) as Sam Vimes is superb casting, and the formidably talented Anna Chancellor as a gender-swapped Patrician Vetinari is a fantastic notion, one I think Pratchett would have approved of. Some fans have expressed disdain for gender-swapping or race-changing characters, but given Pratchett's own views on the subject (and Ankh-Morpork's bustling cosmopolitanism) I suspect he would not have given a flying toss about any of those kind of changes.

The changes to the themes, characters, storylines and the very morality of the Discworld books are much more concerning, and I suspect would have set alarm bells blaring for the author. 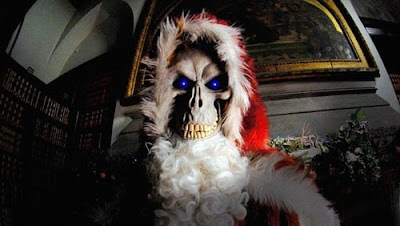 Why buy the rights and then not adapt the books?
This is the question I suspect a lot of people are asking right now. Peter Jackson didn’t option The Lord of the Rings and turn it into a movie where Frodo Baggins is a ninja and Aragorn rides a Harley Davidson (no matter how interesting that might have been). Even Benioff and Weiss didn’t option Game of Thrones and turn it into a relationship drama about Ned and Cat’s marriage, and before the HBO show Martin’s novels were – especially compared to Pratchett – relatively obscure. Benioff and Weiss of course ran into trouble when they ran out of source material and had to create original material of their own, but that wasn't entirely in their control (although they should have still done a better job and not severely rushed the last two seasons, to be clear).

It feels like there isn’t an answer to the question that really makes sense. Simply adapting Guards! Guards! and maybe Men at Arms as the first season, maybe with some stand-alone new episodes thrown into the mix, is a fantastic idea. You can do some interesting casting if you want – seriously, Chancellor should kill it as Vetinari – but taking some of the strong, interesting female characters Pratchett created and turning them into clichés is pointless and insulting.

Even worse, the rumblings of discontent by Discworld fans is something you really don’t want to happen. Just as Game of Thrones did everything right (at least in the early production phase) and won a lot of support from book fans who spread word-of-mouth about the TV show and helped turn it into the biggest thing in television, The Watch is actively annoying and angering the millions of Pratchett fans who wanted a more faithful adaptation, and there are far, far more of them then there were fans of Martin before the show launched. This is something that could actively backfire in BBC America’s face when the show launches late next year.

Could it be that The Watch ends up being a pretty good piece of television? Maybe. But if writer Simon Allen wanted to create an original fantasy police TV show, he should have gone and created his own one. Optioning Terry Pratchett's fantastic novels and then refusing to use the stories in them the way the author intended is baffling and disrespectful.

Thank you for reading The Wertzone. To help me provide better content, please consider contributing to my Patreon page and other funding methods, which will also get you exclusive content weeks before it goes live on my blogs.
Posted by Adam Whitehead at 11:27

The fact that Pratchett himself obviously viewed Discworld as more of a storytelling canvas than some sort of continuous epic suggests he would've been fine with it. Also, there are just so many books! They'd never all of them get adapted anyway.

How come the show is fine with gender swapping and race swapping some characters but not fine with having a 'fat' Lady Sybil. Also, where in The Dungeon Dimensions are Fred Colon and Nobby Nobbs!! The fact that Rihanna Pratchett has emphatically stated on Twitter that she has had no involvement with the production after her father's death suggests to me that if Sir Terry were still alive today we would still be waiting for any kind of adaptation at all. The quote from Ursula Le Guin on what she thought of Television Lands' adaptation of Earthsea I think is very telling. BBC America have just not understood Discworld. On the bright side, it seems so loosely based on the novels that we don't really need to watch it!