Bellboy Todd Brotzman is not having a good day. He is in trouble with his landlord, his sister is suffering from a disease that leaves her housebound and he's just discovered some dead bodies in the penthouse of the hotel he works in. Just as things can't get any worse, he meets an eccentric Englishman named Dirk Gently who insists that he is Todd's best friend and gets embroiled in an increasingly bizarre detective case. 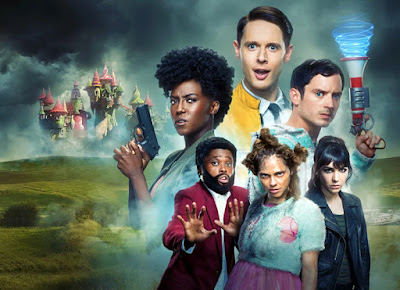 Dirk Gently's Holistic Detective Agency is a BBC America production that ran for two seasons in 2016-17. The series is inspired by two novels by British comic SF author Douglas Adams, Dirk Gently's Holistic Detective Agency (1987) and The Long Dark Tea-Time of the Soul (1988). The TV show's relationship to the novels is ambiguous: references to the events of the novel in the show suggest this is a sequel to the books, but Dirk Gently's backstory, character and age are at extreme variance with his book incarnation. Given Douglas Adams' own predilection for rewriting his stories every time he moved them to a new medium, it's probably for the best to consider this series to be more inspired by the books than directly adapting them.

The TV show comes across as a bizarre, madcap adventure which borrows a lot from the work of Noah Hawley (Fargo, Legion), with the same offbeat tone and odd dialogue choices. It's much more overtly science fictional though, with time travel, body-swapping and parallel universes playing a role. It's also surprisingly violent, with death, explosions and gunfights being a common way of resolving plot threads. In that sense the show feels like it's trying to be cleverer than it actually is - scriptwriter Max Landis (Bright) is not a particularly subtle or nuanced writer - but it's still an eminently watchable show.

The main success of the series is its casting: perennially confused everyman Elijah Wood (Lord of the Rings, Wilfred) is perfect as Todd the reluctant sidekick, Samuel Barnett is excellent as Dirk and Fiona Dourif is oustandingly growly as holistic assassin Bart. Rounding off the regular cast is Jade Eshete as badass bodyguard Farah, Hannah Marks as Todd's sister Amanda and Mpho Koaho as IT expert (and reluctant advisor to Bart) Ken. Their characters all initially appear to be fairly broad archetypes - Todd as the sceptic, Dirk as the kooky Englishman - but quickly gain new layers as their backstories are explained. Todd, in particular, gets fleshed out impressively over the first season and we learn more about what drives him.

The two seasons feel like novels in a series, with each season having its own distinct storyline and secondary cast (including the likes of Battlestar Galactica's Aaron Douglas and Firefly's Alan Tudyk) which means each can be watched and enjoyed individually, with important character arcs continuing between them. The first season delves into a weird cult operating in Seattle, whilst the second focus on a town in rural Montana which has been plagued by strange events. Both stories are strong in their own way (Season 1 has the cleverer mystery, Season 2 has the stronger supporting cast), although the tonal difference between them can be a bit jarring if you watch the whole series right through.

There's a lot to enjoy about the series, from the characters to the offbeat writing to the meticulously-constructed plot. However, there are some issues. The show seems to be channelling the likes of Fargo but isn't quite as good. Being based on a pair of Douglas Adams novels, you also expect the writer to either base the story on the books or at least bring some of Adams' sensibility to the screen and doesn't really do either. There may be no two finer writers to crib from than Noah Hawley and Douglas Adams, but doing so overtly and not coming up to either's standard is a bit disappointing. The very vague connections between the books and the TV show also make the connection feel worthless: Landis may have been better dropping that connection and just creating his own completely original property rather than leaning on these well-known books.

Still, if you can move beyond that there's a lot to enjoy. The performances are exceptionally good (Fiona Dourif - daughter of Brad - offers up some next-level intensity and weirdness), the stories are clever and make sense (eventually) and it's great to see a show that leans in and embraces its weird side. The biggest issue is that the writers were setting up a longer-term arc for the series and its cancellation after Season 2 does waste some of that setup work. Still, the primary storylines of the first two seasons are resolved and there's much less of a cliffhanger ending to the story, so it can be enjoyed as a completed entity.

Dirk Gently's Holistic Detective Agency (****) is available now on Blu-Ray in the US and on Netflix in much of the rest of the world.
Posted by Adam Whitehead at 12:05

I loved this show a lot. I like to think of it as a Dirk Gently show written by people who never read the books but did overhear two people talking about them in a loud, crowded pub. It gets the essence of the characters and main conceit without getting too bogged down in being faithful to the actual books.