Eleanor Shellstrop is killed by freak accident involving shopping trolleys and an erectile dysfunction advertising truck. She wakes up in a surprisingly non-denominational afterlife and is told that, thanks to a life dedicated to charity and selflessness, she has made it to "the good place." Unfortunately, there's been a mistake. Eleanor is superficial, selfish, self-centred and cynical. Terrified at this mistake being discovered, Eleanor sets out on a quest to become a better person...whatever that means. 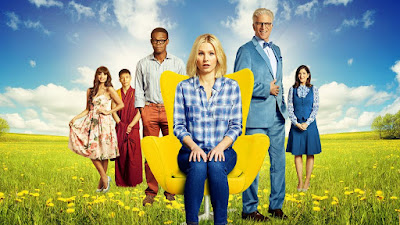 The Good Place is a sitcom riffing on some pretty weighty themes: life, death, religion, morality, existentialism and ethics. Fortunately, it's also an extremely funny show. Created by Michael Schur, modern American TV's sitcom-whisperer (he cut his teeth on the American Office before co-creating Parks and Recreation and Brooklyn Nine-Nine), it's a high concept that the show repeatedly explores and deconstructs. It's also, startlingly, a heavily serialised show. The Good Place is not a status quo sitcom, it's an ongoing, continuing narrative. The fact that each episode is called a "Chapter" and the numbering continues between seasons confirms this.

Thematically the show is an exploration of whether our characters are set in stone by immutable factors, or if we can change ourselves for the better, and if doing so out of fear (in this case, the fear of going to "the bad place") is still morally a good thing if the results are positive and beneficial, for the individual or the community. Students of ethics and philosophy will get a buzz out of some very funny jokes revolving around Kant, Plato and Aristotle.

Schur knows that such musings aren't going to be for everyone, so also grounds the comedy through the character of Eleanor, who has no particular interest in such ideas. The exceptionally-talented Kristen Bell (Veronica Mars, Heroes, Fanboys, Frozen) is as watchable and funny as ever as Eleanor, depicting her as a selfish woman who is only out for #1 but rapidly evolves as a person when she finds herself in the afterlife and having to make up for her mistakes after the fact. William Jackson Harper is also exceptional as Chidi, a neurotic ethics professor whose help Eleanor enlists to become a better person. Rounding out the main cast are Jameela Jamil as uber-socialite Tahani, Manny Jacinto as Jianyu (a Buddhist monk who is more - or less - than he seems), D'Arcy Carden as Janet (a personal assistant who constructs and maintains the good place) and the mighty Ted Danson as Michael, the sort-of angel who designed this particular version of the good place. The cast is exceptional, with great chemistry. 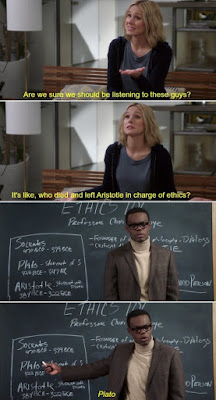 The show's continuously developing plot and short-order seasons (each season is only 13 episodes long, each only 22 minutes in length) makes it both easy to catch up with and addictive to watch. For a high-concept sitcom not to exploit its ideas until they're dry but instead relentlessly finding new ground is unusual, but works very well.

The show does have a couple of weaknesses. First, it moves so fast that sometimes it feels a bit too fast, and a couple of holding-pattern episodes to let viewers catch their breath might be welcome. Secondly, and this is mildly spoilerific, the show presses a big reset button at several key points in the story, junking the character (but not story) development we've seen over multiple episodes and resetting the characters to their Episode 1 status. There's a good story reason for this and the cast copes with it quite well, but it can be frustrating to see our characters playing "getting to know you" again when we've already seen that twice before. Hopefully this will stop with the upcoming third season and the writers will let the characters grow more effectively.

The first two seasons of The Good Place (****½) are funny, well-characterised, cleverer than you'd think and extremely enjoyable, with the writers and actors on the top of their game. The Good Place airs on NBC in the US and on Netflix in much of the rest of the world.
Posted by Adam Whitehead at 10:53

Much like Parks & Rec, the first season of this was spotty and a bit of a mess at times. But OH MY GOD, how well they brought things together at the end, and season 2 was just a delight. Janet and Michael are the best supporting characters for me, but I find Chidi and Tahani to be the weak links in terms of acting ability.