The City and The City

Beszel and Ul Qoma are two cities that share the same space. The people, the buildings and the institutions of one city must be ignored by residents of the other, on the pain of arrest by the secret police, Breach. When a young woman from Ul Qoma is found dead in Beszel, Inspector Tyador Borlu must investigate to see if a Breach has occurred...but the case reminds him of the disappearance of his wife some years earlier. As Borlu investigates, the trail leads him to Ul Qoma and the chance to solve more than just one mystery. 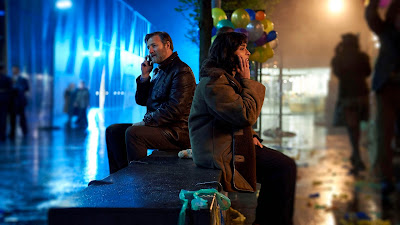 China Mieville is one of Britain's finest novelists, a writer of the macabre, the strange and the weird who writes in an accessible but memorable style. The City and The City, originally published in 2009, is one of his most stripped-back and accessible novels, the weirdness dialled back to just the idea of the two cities coexisting in the same space. That backdrop is then used to explore the characters and the central murder mystery.

This 4-part BBC television adaptation is a fine take on Mieville's work. David Morrissey (Britannia, The Walking Dead) plays Tyador Borlu, imbuing him with just the right mix of world-weary cynicism, hope and even romanticism as he tries to find answers to the puzzles in his life. Katrynia, played by Laura Pulver (Sherlock), is a new addition to the story and at first glance the inclusion of a "dead/missing wife" as a motivational factor for the main character feels a bit cliche. It does help in giving Borlu a personal connection to the mysterious relationship between the two cities, rather than having it remain an abstract background phenomenon (as in the first half of the novel), and it also creates more storytelling possibilities through flashbacks.

The rest of the cast is accomplished, with Mandeep Dhillon exceptional as the sweary Constable Corwi and Maria Schrader doing a great job as Detective Dhatt, Borlu's Ul Qoman opposite number. Production is also of a high standard, with a great musical score and some very impressive set dressing to sell various parts of Liverpool and Manchester as the twin cities. Some might argue that using two of Britain's best-known cities to serve as the backdrop for a series playing initially to British audiences is a bit weird, but for the most part it works, transporting the viewer to an imaginary microstate on the borders of eastern Europe.

At four hours to adapt a 350-page novel, the drama is just the right length and doesn't outstay its welcome. There are some issues with pacing and exposition, however. The premise is unusual and the series goes pretty far in the first episode in ensuring that viewers get the idea. Given the number of viewers who reported feeling extremely confused, it clearly didn't go far enough for some, but for others (and particularly those who've read the novel), the constant reiteration of the twin cities idea and "unseeing" started getting in the way of telling the story at hand. Also, and this is really minor, the novel ends on a pitch-perfect line and I was surprised that the TV show did not do the same thing.

Overall, The City and The City (****) is a fine slice of television drama, with an accomplished cast and some great visual storytelling. The handling of the unusual premise could have been handled more elegantly, perhaps, but overall this is a great first adaptation of a China Mieville novel and hopefully not the last. The series is available on DVD in the UK and to watch via Amazon Video, but bizarrely a Blu-Ray release has not been listed. There is also no American release listed at this time.
Posted by Adam Whitehead at 14:53

Email ThisBlogThis!Share to TwitterShare to FacebookShare to Pinterest
Labels: bbc, china mieville, the city and the city