In an unusual move, Adult Swim have ordered 70 episodes of Rick & Morty without a season commitment. 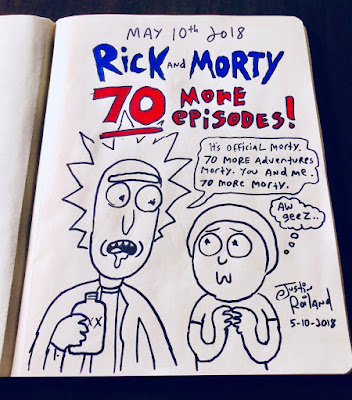 Darn Harmon and Justin Roiland's series has only aired three seasons and 31 episodes since debuting in December 2013, with Season 4 not expected to air until 2019, meaning this order will more than double the existing number of episodes and potentially last for another ten years given current production rates.

Harmon and Roiland's deal, which specifies episodes rather than seasons, came after a chaotic production process for the third season, which saw fewer episodes produced than originally planned and an extended writing period. The new deal raises the possibility of the series being continued in batches of episodes made a few at a time rather than large numbers of episodes ordered on a tight deadline, and gives Harmon and Roiland more flexibility in how to handle the show going forwards.
Posted by Adam Whitehead at 20:48