Amazon has reached a deal with Alcon Entertainment to produce a fourth season of The Expanse for its Amazon Prime TV streaming wing. 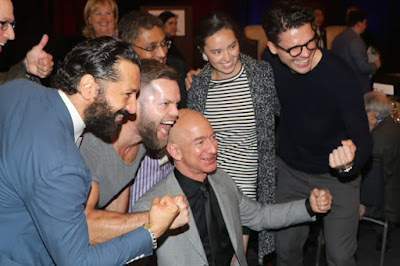 The Expanse was dropped a fortnight ago by SyFy, not over ratings but over their difficulties in monetising the show; their deal with Alcon meant that SyFy didn't get a cut from their streaming deal (with Amazon in the US and Netflix in the rest of the world), nor the DVD and Blu-Ray sales, making them unusually reliant on first-night viewing figures.

Jeff Bezos personally announced the pickup at the National Space Society, during a talk an hour after the Expanse cast and crew held a panel of their own.

The news came after two weeks of hard campaigning by fans, the cast and crew, which resulted in an aircraft flying over Amazon's HQ trailing a "SAVE THE EXPANSE" banner for four hours and even resulted in a model of the Rocinante spacecraft being sent into space. 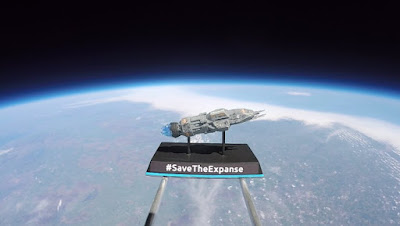 With the sets still standing and preliminary work on a fourth season apparently already underway, we can expect to see The Expanse join Amazon Prime's line-up in 2019.

Woo hoo! Love that picture at the top and everyone's reaction to the announcement in the video.