LORD OF THE RINGS TV series will focus on Aragorn

The One Ring - the largest Middle-earth fansite with numerous, decades-long contacts inside the Tolkien Estate, publishers, Weta, New Line Cinema and Amazon - has confirmed that Amazon's new Lord of the Rings TV series will focus on the adventures of Aragorn some decades prior to the events of the novels and movies. 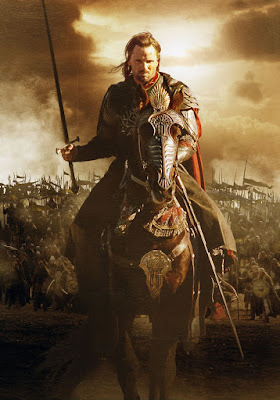 This news was not unexpected, with Aragorn's adventures as a young man - partially related in The Lord of the Rings' appendices - serving as the most logical basis for a Rings prequel story, given that the Tolkien Estate, despite a warmer attitude to this project, has not sold the rights to Unfinished Tales or The Silmarillion.

Meanwhile, Andy Serkis has confirmed that he is not interested in reprising his role as Gollum for the project, although given that a "young Aragorn" series would predate The Hobbit, Gollum would not be expected to appear anyway. However, if the series moves into the timeframe between the two books, there is scope for the series to include the "Hunt for Gollum" storyline from Lord of the Rings, where Aragorn and Legolas track Gollum down in Mirkwood on Gandalf's orders to keep him away from the Shire.

This will deter Average Joes from thinking it'll be a remake of the trilogy, or they'll adapt The Silmarillion.

I just hope that Amazon won't be elitist and have some things (aside from the show itself) exclusive to Prime Members. It makes sense that's how one will watch it, but hopefully you won't need to be a member to get the season 1 soundtrack, for example.