Han and Qi'ra are two slum-rats living in the industrial hellhole that is Corellia, a planet whose proud people have been reluctantly turned into shipbuilders for the Galactic Empire. Han manages to escape, but vows to return one day to save the woman he loves. Three years later he's been bounced from the Imperial Academy, served as a grunt in a confusing war and then defected to join a criminal gang looking for a big score. Han still wants to get home, but first he needs a crew, a ship and a co-pilot. 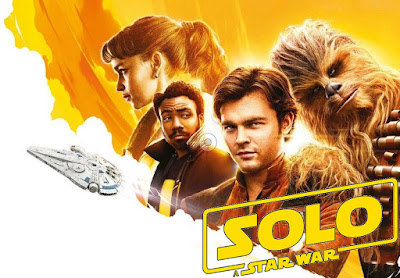 In 1972, during the shooting of his second feature film, American Graffiti, George Lucas turned to his young lead actor Ron Howard and told him about the plans he had to make an exciting, Buck Rogers-riffing space opera franchise, a story of rip-roaring space adventures with scoundrels as heroes, blasters and lots of action. Forty-six years later, in a plot twist few could have seen coming, Ron Howard finally made that film.

Solo: A Star Wars Story is certainly not the best Star Wars movie, but it may be the purest. This is a film about a roguish hero who sets out on a quest to pull off a heist to get the girl and it all goes a bit sideways and he learns some lessons and the audience has a huge amount of fun along the way. This is Star Wars with an alternate take on the hero's journey, without the space wizards or magic or laser swords or prophecies, but plenty of blasters, quips and explosions. It's also a surprising Star Wars movie: almost any nerf herder who's seen the Empire Strike Back incarnation of Han Solo could write a version of this movie which was safer, duller and very predictable. It fell to the movie's bizarre gestation period (including a change of directors two-thirds of the way through production) and formidable writing team (including Lawrence Kasdan making his farewell to the franchise that made his name) to turn it into a more surprising and interesting beast.

Solo is relentless. It's a film that lands with a massive bang - a chase through the tunnels of Corellia - and then does not let up for over two hours. Set piece after set piece rains down on the viewer, but the Kasdan team and the directors (I'm not even going to guess who directed what scenes here) keep the movie buoyant, not allowing it to get too bogged down in exposition. Dialogue sparkles and the action is very well-handled, with the fights and chases being easy to follow. There's a surprising physicality to the film, with a reliance on actual stunts and sets rather than CGI, which is good to see. The fast-moving flow of the film also sometimes masks some dubious plot twists - one coincidental meeting is so far beyond implausible it's not even remotely credible, but hey, the Force or something - but it's not like Star Wars hasn't had a few of those before.

There's also a fortunately strong reliance on the actors. Alden Ehrenreich won't be nominated for an Oscar, but is mostly effective at channelling the spirit of Harrison Ford (and he's better at doing that than trying to do an outright imitation), albeit a younger and even more cocksure version. Emilia Clarke is great as his love interest Qi'ra, and the movie takes her character in a very surprising (and welcome) direction that goes beyond being just a motivational force for Han's journey. But the real plaudits will be awarded to Woody Harrelson, whose grizzled scoundrel-mentor character of Beckett is way more Han than Han himself, and particularly Donald Glover. His take on Lando Calrissian is the highlight of the film, with formidable comic timing, surprising emotional depth and a performance that channels the spirit of a pre-1980 Billy Dee Williams. Even better, Lando isn't allowed to be too dominant a force in the movie: he has his role to play and departs once that is done. Paul Bettany also has a small but significant role as the film's erstwhile antagonist, a criminal overlord who first Beckett and then Han get indebted to and have to pull off a dangerous heist to appease. 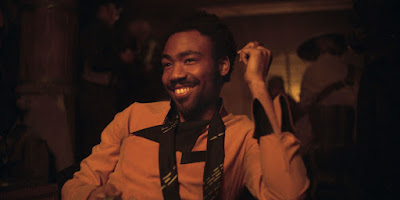 Hardcore Star Wars fans will also enjoy the film for its numerous call-outs to the defunct Expanded Universe (particularly a nod to the Maw Installation and the dangerous approach to Kessel) and one particular moment that will blindside the 90% of the audience who hasn't seen The Clone Wars or Star Wars: Rebels, leaving the other 10% feeling particularly smug as they nod to one another across the cinema and say, "Ah, of course" in a probably insufferable manner. After seeing the Marvel Cinematic Universe go to some lengths to avoid mentioning its TV spin-offs as canon in the films, seeing Star Wars just breezily and casually do it in the most unexpected manner possible is terrific, if extremely geeky. More casual Star Wars fans will appreciate the nods to other Star Wars films and stories (C3-PO asks a question in The Empire Strikes Back which never gets answered, but it does here), with the film having some fun in giving us very brief answers to questions that no-one ever asked ("Where did Han Solo get his blaster?") but occasionally getting rather silly in giving more in-depth answers to questions no-one ever asked ("Where did Han Solo's name come from?").

The movie does have several significant flaws, however. The first is that towards the end of the movie it goes a bit too obviously in the direction of sequel-bait. Solo is directed towards a new mission, several side-characters are revealed to have unexpected agendas and a new villain is unveiled. With rumours circulating that Disney are considering two sequels to this movie, they clearly leave enough on the deck to facilitate that. However, the film does hit most of the beats you expect and if those sequels don't happen - Solo's incredibly low-key release, mixed word of mouth and the massive juggernaut of Infinity War still commanding the box office could result in this being one of the lowest-grossing Star Wars movies to date - there's enough closure here not to make the absence of a sequel hurt too much (they can also rather cleverly tie those elements into the Obi-Wan movie instead, if necessary). The second problem is that the movie is definitely too long. This film works best as a pulpy space adventure, a rip-roaring, fast-paced adventure. The two hour-and-ten-minute run time isn't entirely compatible with that and the film does feel like a set piece or two could have been yanked out to get this movie down to a brisker ninety minutes or so.

For a film with as tortured a development process as this one, Solo: A Star Wars Story (****) ends up being surprisingly focused and enjoyable, with great performances and a fun storyline that isn't as predictable as you'd think. Of the new generation Star Wars films, this one views with The Force Awakens as the best: The Force Awakens is better-cast with a far stronger villain, but Solo is far less predictable and manages more genuine surprises. The movie is on general release now.
Posted by Adam Whitehead at 21:29

Good review! 4* for me, also. A genuinely thrilling and enjoyable film that has great fun. Good characters, too.

I did enjoy Solo, but it was a heavily flawed movie, probably due to the change in Director during filming.

I didn't like the way Disney handled certain aspects of Han's history in order to make it their own. Specifically, Chewie's rescue was pretty straight forward and certainly doesn't warrant a "Life Debt". I also didn't enjoy the Kessel Run explanation and would have definitely preferred the Legends version, but I suppose that would have been a little boring for the big screen.

I have to admit that the cast was solid, but certain characters felt a little underused. (although I didn't like L3-37 very much.)

At the time, I felt that Solo suffered from fan backlash after furore of The Last Jedi, which wasn't fair at all.

I have to confess that I only saw it once myself. Maybe I should break out the Blu-Ray and give it another chance.