THE WALKING DEAD to lose its star this year

In a surprising move, it's been confirmed that Andrew Lincoln, who plays main protagonist Rick Grimes, will depart The Walking Dead halfway through the upcoming ninth season. This comes shortly after the news that Lauren Cohen (Maggie) will drop down to a recurring character next year after she was cast in ABC's new show, Whiskey Cavalier. 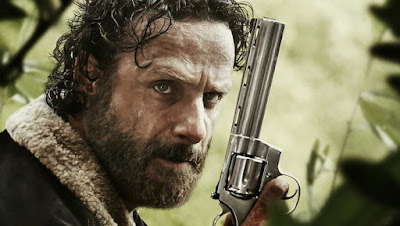 The Walking Dead is of course known for its frequent shifts in cast, but Lincoln has played a major role on the show since the very first episode of the series aired in 2010. Cohen has also been a relatively major player since she joined in Season 2. The move leaves Norman Reedus as Daryl Dixon and Melissa McBride as Carol Peletier as the sole two surviving regular characters from the first two seasons on the show. Reportedly AMC has offered Reedus a substantial salary hike to take over as the surviving character. Chandler Riggs, who played Rick's son Carl, was abruptly killed off in Season 8 for no immediately discernible reason, leading to a negative backlash by the fans and the actor (and his family).

Of course, it's not a given that the character of Rick Grimes will be killed off, although given the circumstances of the zombie apocalypse it's hard to see him just walking off into the sunset.

The casting changes have been a bit bemusing, as it was generally assumed that Rick would either make it through the whole show or would die at some point, handing off to either his son Carl or Maggie, who has gained impressive leadership skills over the course of the series whilst becoming a mother and losing her entire family to the zombie apocalypse.

The long-term future of The Walking Dead remains open to question, with some rumours suggesting it will end after Season 10 in 2019-20. AMC have been bullish, claiming that the show could last effectively forever with regular shake-ups in cast, but this has never been taken entirely seriously by critics. In particular, the show remains the target of multiple lawsuits from original producer Frank Darabont and comic creator Robert Kirkman. If these lawsuits are successful, AMC could potentially lose every single dollar of profit they've made on the show in eight years, which might sour their enthusiasm for it. Another possibility is that spin-off show Fear the Walking Dead, which has seen improvements its critical reception recently, might step up to take over the parent show's timeslot, possibly with a further spin-off put into development.
Posted by Adam Whitehead at 21:15

Huge development. Could also help define the series by finally shifting the focus to Darryl.

The show's been gradually going down hill ever since the pilot. The pilot was amazing. after that, it not never got better or reached the same level of quality.

Essentially, the show is "people arguing, and sometimes zombies show up."

Such a shame, given how great the comics are.