Gardens of the Moon by Steven Erikson

On the continent of Genabackis the Malazan army lays siege to the city of Pale, which sits under the protection of Anomander Rake, Lord of the Tiste Andii. As the final battle begins, the elite Malazan unit known as the Bridgeburners and several High Mages suffer a calamitous betrayal. Their next mission takes them to Darujhistan, City of Blue Fire, where an even more dangerous showdown awaits... 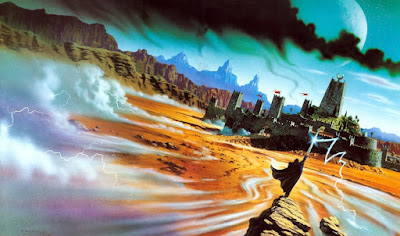 Steven Erikson's Malazan Book of the Fallen began unfolding back in 1999 with this divisive novel. Strongly hailed by authors from Stephen Donaldson to J.V. Jones as an important, breakthrough work and found utterly baffling by others, Gardens of the Moon has acquired a bit of a reputation over the years as a hard book to get into.

I've always found this suggestion to be overstated, just as much on this fourth reread as on my first fifteen years ago. Gardens of the Moon is a busy, bustling and striking novel which has little interest in slowing down to providing worldbuilding infodumps. You cling on for dear life and follow the story through or you don't. Still, the benefit of fifteen additional years of books from both Steven Erikson and co-creator Ian Esslemont means there are now other, gentler introductions to this world and this story: you can also jump on board with Erikson's Deadhouse Gates or Esslemont's Night of Knives or Dancer's Lament, which all have somewhat easier opening sections.

Gardens of the Moon opens with a bang and doesn't stop for 700 pages. In that time it introduces a whole, vivid world dominated by a powerful empire, dozens of characters, a whole new (and rather vague, at this stage) magic system, a dozen races, multiple gods, a prophetic Tarot card game, undead Neanderthals, a race of elves who are also dragons and more nods to other authors (from Leiber to Donaldson to Cook) than it's possible to parse in one read. It's a mess, without reasonable exposition or grounding in the reality the characters find themselves in.

But it's also a glorious mess. Erikson's imagination here is bigger than a planet, his prose is erudite and far wittier than any first-time author has any right to be (this was Erikson's second-published novel but was written many years earlier), and through the confusion the chaotic charisma of characters like Whiskeyjack, Anomander Rake, Quick Ben, Tattersail, Ganoes Paran, Kalam, Fiddler, Rallick Nom and Caladan Brood is clear. Yes, Gardens of the Moon sometimes feels like starting watching a movie that's already been on for an hour, but that can also be quite good fun.

Once you get through the opening, confusing section at Pale, the action moves to Darujhistan where nobles scheme, assassins plot and thieves fight a clandestine war on the rooftops and things become a lot clearer. From there on it's an easier ride to the big climactic showdown, which is epic, impressive and random (not helped by a deus ex machina resolution, although on rereads when you know what the hell's going on this is much less of a problem).

There are other niggling problems, mainly relating to "GotMisms", worldbuilding and character tics that Erikson put into this book which he changed his mind about in the nine years that passed until he wrote the second volume, Deadhouse Gates. In particular, if the key theme of the Malazan Book of the Fallen is compassion, that theme feels a bit absent in this book as Anomander Rake shows an uncharacteristic amoral ruthlessness (compared to later books) and no-one seems to know anything at all about the ancient races and history of the world whilst later on everyone seems a lot more clued up (one of the more relatable things about this novel is that the characters are often as confused about what's going on as the reader, which is less the case in later volumes of the series). Still, these continuity issues are minor and understandable given the protracted genesis of the series.

Gardens of the Moon (****) is by turns bewildering, confusing, rewarding, exciting and intriguing. It will bewilder a lot of people, but out of that bewilderment will come understanding. The Malazan Book of the Fallen is the most accomplished work of epic fantasy published (predominantly) in the 21st Century to date, and this remains the best place to start, setting the scene as it does for its two successors, which are simply two of the finest fantasy novels ever written. The novel is available now in the UK and USA.
Posted by Adam Whitehead at 13:31

Email ThisBlogThis!Share to TwitterShare to FacebookShare to Pinterest
Labels: gardens of the moon, steven erikson, the malazan book of the fallen

I read this years ago and didn't continue the series. Tried it again last year and couldn't make it halfway through the book. So much happening but feels utterly hollow and is just a dreadful experience to me. I love fantasy but can't find much new that I like these days.

I ended up selling or giving away all my Erikson books but I remember being absorbed by the first three books. Buying them from a bookstore in Victoria BC on vacation and just reading them all back to back.

But in a sense, the beginning of Gardens of the Moon was the high point of the series. By the end of the book he's taken this army and their High Mages and just torn them asunder. A process of fragmentation and decay that gets worse and worse as the series goes on.

I loved the idea of the Malazan Army. Erikson seems to hate it or take an authorial glee in grinding them down to nothing. I wanted to read more about how they and the characters interacted, the army with it's crossbow-armed Marines, the Monarths with their explosives, the Squad Mages (stolen from Glenn Cook but I hadn't realized it at the time), the High Mages, the demon auxiliaries. And above all, the Emperor and Dancer. I wanted heroes. Not moody emo twats.

But that wasn't what Erikson wanted to write about. That disconnect, between what I wanted to read and what he wanted to write is what cased me to give up on him and this series. (Karsa Orlong cemented my disgust but that's a longer rant)

I still read the Esslemont books, he seems to have a better grasp on human motivations and behavior, but I can't look at Gardens of the Moon without thinking how things went wrong, right off the bat.

Best fantasy series ever IMHO. While i think Erikson lost himself With the Kharkanas books, his 10 books of the fallen are just brilliant.

One of the more egregious ones is that the squad seems blown away by the revelation of Shadowthrone's and Cotillion's identities, and yet in the follow-on books everyone seems to know this as a matter of course.

It's also mentioned that commonfolk think magic and gods are just made-up nonsense, which doesn't make much sense given the level of influence both are shown to have in the mortal world.