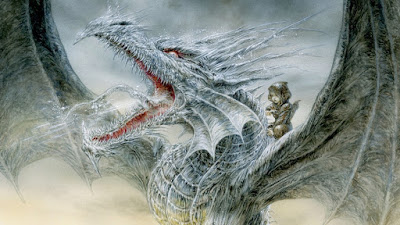 Artwork from the 2014 edition of the story, illustrated by Luis Royo.

The Ice Dragon was originally published in 1980. One of GRRM's most popular short stories, it was re-released as a stand-alone children's book in 2007 (and in a new edition in 2014). The story follows a young girl named Adara who befriends an ice dragon after the death of her mother.

Contrary to some confused plot synopses, The Ice Dragon is not set in the same world as A Song of Ice and Fire (or its TV adaptation, Game of Thrones), but Martin has referenced it in the books by naming an important constellation in the skies of Westeros after it.

Due to his exclusivity contract with HBO, Martin will not be working on the film beyond a producer's credit. A writer and director for the film has not yet been announced.
Posted by Adam Whitehead at 16:54