All the Pieces Matter: The Inside Story of The Wire by Jonathan Abrams

In 2002 HBO debuted a cop show with a difference. Rather than wrapping up an investigation in an hour, The Wire's first season followed one complex, sprawling drug case in Baltimore across an entire season. For the second year the show abruptly pivoted to a new investigation in the city docks. Season 3 introduced a strong political storyline, whilst in the show's final two seasons it focused on education and the media. In the process the show built up a portrait of the modern American city and its underclass, the people left behind by industrialisation and automation, and exploited by criminals, governments and corporations alike. It was only after the show ended in 2008 that it became acclaimed as the "greatest TV show ever made," a position it is still quoted in to this very day. 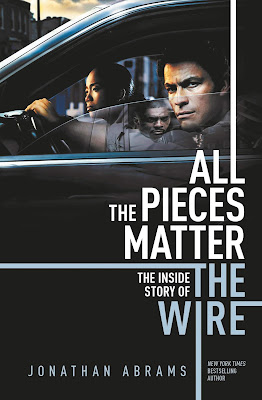 All the Pieces Matter is an oral history of the production of The Wire. Jonathan Abrams tapped an enormous number of people involved in production, from David Simon and Ed Burns, the show's creators, to Idris Elba and Dominic West (its breakout stars) to Michael B. Jordan (who became a star much later). Politicians from Baltimore, studio executives at HBO and pretty much everyone he could find with a connection to the show offer up their thoughts as well.

The book has a number of advantages over previous books about the show. Over a decade has now passed since the show has ended, which allows for much greater reflection. Actors and crew also feel a lot freer to talk about the things on the show that didn't go well: finding out that Lance Reddick really didn't like Dominic West is a surprise (but explains how that dynamic on TV worked so well), as is that Idris Elba reacted the mostly badly to his character being killed off, or that almost the writing team utterly loathed the pivot to the political storyline in Season 3 and refused to write any of it, leaving it to just two writers to handle that entire element of the show. It's also a surprise to see that HBO renewed The Wire for two seasons after Season 3, and then tried to renege on that deal after Season 4 (despite its massive critical acclaim and it being the first season to really start generating lots of positive coverage about the show).

It's also interesting to see how the actors were affected by their roles: Andre Royo found playing Bubbles so all-consuming that he barely made it through the five seasons and struggled to adjust to other roles afterwards. Dominic West never felt comfortable with the accent and had an accent coach on hand through the entire show, right up to the series finale. Sonja Sohn was so moved by her time on the show she eschewed a potential Hollywood career to move to Baltimore and set up charities and workshops to help local gets get into acting as a way of getting off the streets. The Wire was an interesting mix of drama, documentary, historical piece and socio-economic analysis, and this book reinforces all of those elements and delves into them in greater detail.

The author's editorial contributions are minor, as he is far more interested in letting his subjects have their say. This works really well, as the cast and crew of The Wire are erudite, witty and intelligent. It's also fascinating to hear from Ed Burns, a taciturn and essential contributor to the show (he was a soldier turned cop turned school teacher) who's rarely talked about his role on the series.

All the Pieces Matter (****½) is very well-named because it collects together the thoughts of everyone involved in the show, no matter how minor, and shows how those contributions came together to create the Greatest TV Show Ever™. The book is available now in the UK and USA.
Posted by Adam Whitehead at 10:02

Email ThisBlogThis!Share to TwitterShare to FacebookShare to Pinterest
Labels: all the pieces matter, david simon, hbo, jonathan abrams, the wire