The very strange case of Amazon developing the Wheel of Time TV series with Sony but not really wanting to talk about it continues. 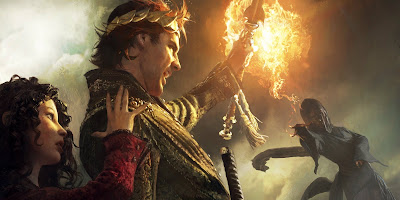 It's an open secret in the business that Amazon is the company that Sony have teamed up with Amazon to bring an adaptation of Robert Jordan's 14-volume fantasy series to the screen. Rafe Judkins (Agents of SHIELD) is working on the project as a screenwriter and possible showrunner, and the pilot script was completed some time ago. Judkins was recently in Guatemala on a writer's retreat to work on the series, possibly with other writers to hand. Although Amazon was known to have had talks with Sony as early as the start of 2017, the announcement of a big-budget Lord of the Rings TV series in November led some to believe that Amazon would not want to develop a superficially similar project at the same time.

Clearly that's not an issue, because all indications since then are that Amazon are on board. Deadline confirmed the company's involvement in February, along with a Dark Tower TV series. After some confusion, Amazon confirmed that Dark Tower is "in development" at Amazon but has not yet received a green light. The project was originally a spin-off from the 2017 Dark Tower movie, but that movie bombing may have led to a creative rethink.

At JordanCon last month, Harriet McDougall - Robert Jordan's widow and literary executor - confirmed that the Wheel of Time series has a network and it's not a "normal" one, basically meaning it will be a streaming service. This eliminates the last few cable channels from contention (Starz and AMC were believed to have looked the project over, likely passing due to costs) and leaves Amazon, Netflix, CBS All Access, Apple TV and the new Disney streaming service as the primary contenders. Amazon obviously has to be the front-runner, due to both all of the previous information and Jeff Bezos's drive to hoover up all of the major SFF franchises not already snapped up by Netflix or elsewhere. She also confirmed that it won't be a pilot order, but a straight to series commitment which is also standard for streaming.

The reasons for the ongoing obfuscation are likely linked to the different partners involved: Amazon, Sony and Radar Pictures all have part of the production pie, whilst the Bandersnatch Group (the official name of the Robert Jordan Estate) and Red Eagle Productions have producer and advisory roles. As a result no formal announcement can be made until all five of these parties (and likely others) are satisfied with the pilot script and the progress of the project. This may happen imminently or it may still be a few months away. Amazon have also announced a lot of projects recently and likely want to open up some room before making further big announcements.

As usual, I'll cover news here and Wheel of Time TV is continuing to cover all of the latest rumours.
Posted by Adam Whitehead at 13:22

As with the Amazon Middle-earth series, I look forward to following as it actually developments. Not rumors, but casting announcements, synopsis, trailer, poster etc...

Sounds like a case of too many fingers in the pie. We shall see. - Ian

Sounds genius, with the end of the Game of thrones series, all the hype and excitement among sci fi and fantasy fans should turn towards these two new shows, and with Amazon not publicizing anything the mystery will probably draw in many fans.

Just fucking do this. Well.

you know who would have been perfect for this, George Lucas with Lucasfilm and LucasArts doing this, back in the early 2000s or mid 90s... just think what could have been