This is an updated version of an article previously published in 2010.

All of Kay's novels - ten to date - take place in the same universe, but are divided into two broad sub-worlds. However, they are published out of chronological order and are almost entirely made up of stand-alone books. The sole exceptions are his two series, The Fionavar Tapestry trilogy and The Sarantine Mosaic duology. Everything else is stand-alone. 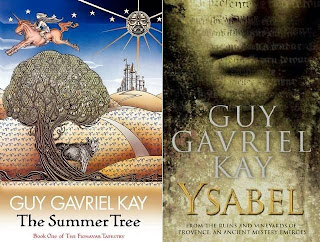 Kay's first published work was The Fionavar Tapestry, a trilogy in which a group of Canadian university students are transported to the world of Fionavar where a traditional battle between good and evil is underway. The trilogy is noted for an interesting magic system (in which sorcerers use other living beings as sources of magic) but is probably Kay's most 'standard' work.

The core trilogy consists of The Summer Tree (1984), The Wandering Fire (1986) and The Darkest Road (1986). Ysabel (2007) is a stand-alone follow-up to the trilogy set on Earth and focusing on different characters in Provence, but several trilogy characters show up in supporting roles.


Stand-alone works in the Fionavar Universe 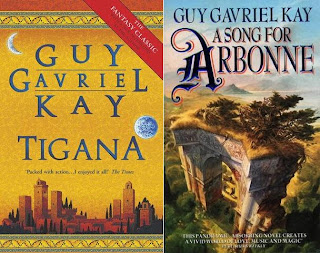 Kay's next two novels are stand-alone titles, entitled Tigana (1990) and A Song for Arbonne (1992). They are set in the Fionavar universe but some very minor references and allusions aside such connections are purely cosmetic. Indeed, Tigana is oftern referenced as the best book to start with Kay with. 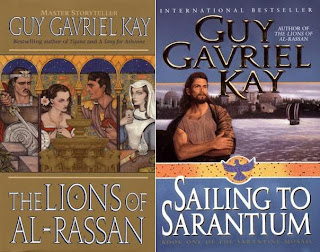 Kay's remaining books are all set on the same planet, a lightly fantasised version of our Earth in several different time periods and locations. Technically this alt-Earth is also located in the Fionavar universe, but again some minor references aside this is again completely irrelevant. The alt-Earth books are all independent of one another and do not require knowledge of the others to enjoy one, with the sole exception that the two books of the Sarantine Mosaic duology need to be read in order.

In publication order with a note on their historical inspirations, these books are as follows: 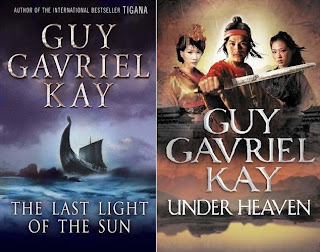 Kay's work can be approached from several entry points. The first book in The Fionavar Tapestry, The Summer Tree is an obvious choice, although Tigana is often cited as a stronger first book. The Lions of Al-Rassan, The Last Light of the Sun, Sailing to Sarantium and Under Heaven can all be approached as other first books as well. In conclusion Kay is an author whose body of work can appear tricky to get into due to the inter-connectedness of the books, but in practice most of these connections are so slight as to be invisible, and with the obvious exception of the multi-volume works his books can be read in any order.

Note
There are some anomalous elements in Under Heaven with regards to the other books. It still appears to take place in the alternate Earth setting, and its China analogue (Khitai) is mentioned in the other alternate history books. However, at one point a character mentions how there is only one moon when he talks about having a dream of a world with three. The Alt-Earth seen in The Lions of Al-Rassan and The Last Light of the Sun is noted as having three moons. This seems to place Under Heaven in a sort of parallel universe to the Alt-Earth, whilst still retaining much of its layout. This is odd, but, that one reference aside, it can be read and enjoyed either as a complete stand-alone or as part of the Alt-Earth books with no problem.
Posted by Adam Whitehead at 17:44

Email ThisBlogThis!Share to TwitterShare to FacebookShare to Pinterest
Labels: a brightness long ago, fionavar tapestry, guy gavriel kay, the children of earth and sky, the last light of the sun, the lions of al-rassan, under heaven, where to start

I'm not sure, but I don't think Under Heaven and River of Stars are set on the same Alt-Earth as the other Alt-Earth novel. I suppose it doesn't really matter though.