Under Heaven by Guy Gavriel Kay

Kitai, during the Ninth Dynasty. The Emperor has given the nation many years of peace and prosperity. Far to the west, in a valley where the last great battle between Kitai and Tagur was fought, a dutiful son pays homage to his dead father by burying the bones of the fallen. His honourable task is noted by the Tagurans who give him a princely gift: two hundred and fifty Sardian horses. You give a man one Sardian horse to honour him greatly, four or five to elevate him above all others. Two hundred and fifty is an overwhelming gift, a gift that instantly elevates Shen Tai into a player in Kitan politics. 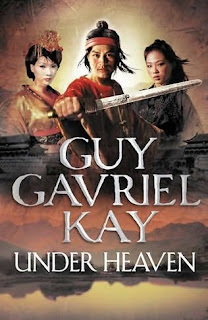 These are perilous times. The First Minister and the empire's greatest general are feuding, the Emperor is distracted by his most favoured concubine and there is tribal dissent among the Bogu people beyond the Long Wall. Shen Tai and his family are thrust into the midst of great events, and find they and their horses may determine the balance of power, and of life and death, for many.

Under Heaven is Guy Gavriel Kay's eleventh novel, and marks a return to his favoured alternate-history setting and genre after the World Fantasy Award-winning Ysabel, which was a departure from his normal work. The setting this time is 8th Century China during the Tang Dynasty, during the lead-up to the colossal An Shi Rebellion (the most devastating war in human history until World War II, if the casualty figures are to be believed), although as normal the setting is lightly fictionalised, with characters and events hewing close to the originals but not quite replicating them.

Kay's China - Kitai - is a place of scheming nobles, courtly poise and etiquette and labyrinth conspiracies, all of which are depicted impressively. As normal, Kay is less interested in war and battles than in the human characters of the story, from Shen Tai and his ambitious brother Shen Liu to First Minister Wen Zhou, the poet Sima Zian and the women of the story (the Beloved Companion Wen Jian, Tai's sister Shen Li-Mei and the Kanlin warrior Wei Song), whose roles are crucial. Kay's grasp of character is as assured as ever, and he brings these people to life to the extent where the reader finds it impossible not to care about what happens to them next. Kay's grasp of emotion is as also finely-judged as ever, with moments of genuinely raw emotional power which never overreach into mawkishness. 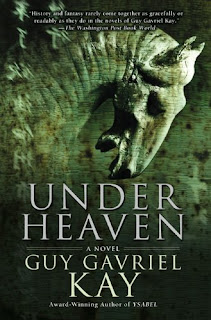 The pacing is also well-handled, and the plot unfolds in a gripping manner. Kay shows greater confidence here as a writer than he has in some time, and his weaving of events, conspiracies and characters into a greater whole is impressive. This is easily his most assured and well-executed book since The Lions of Al-Rassan, if not ever. The only possible criticism I could find is that the ending is slightly abrupt, although the main storyline and character arcs are satisfyingly resolved.

Under Heaven (*****) is a superb book from one of our best writers working at the top of his game, and will likely be judged one of the strongest books of this year, in fantasy or otherwise. It is available now in the UK and USA.
Posted by Adam Whitehead at 16:12

Oh, I'm so pleased. Lions is one of my favourites from him so it's exciting to hear so many good comparisons.

He's not the most prolific of authors but I treasure a release from Kay every time.

I liked Kay's previous books (Lions, Tigana), but isn't this book being hyped a bit too much? 5 starts would mean it is there with the likes of Game of Thrones or Memories of Ice (to me at least).

Is it really as good as these books?

Not too hyped at all. It really is that good.

Nice review Wert! Kay is one of my favorite authors and I'm excited to check this new book out. I'm also hoping to catch him on his book tour early next week!

"Under Heaven" is easily my favourite of Guy's novels. It's hard to put my finger on the reason. Perhaps the characters, who seem to me to be better developed than in earlier novels.