Pat from Pat's Fantasy Hotlist has had it confirmed by Steven Erikson's UK publisher that The Crippled God, the tenth novel in the Malazan Book of the Fallen sequence, has been officially delayed until January 2011. With Erikson not due to hand in the book until August, a fast turn-around to get the book out in the autumn has proved unfeasible. Dust of Dreams, the ninth book, launches in the UK in mass-market paperback next week. 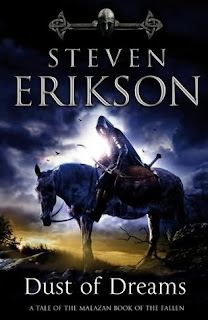 However, based on previous information, Ian Cameron Esslemont's third Malazan novel, Stonewielder is still due for November/December this year, and should prove an effective stopgap until The Crippled God's release.

This news puts The Crippled God's release date very close to Joe Abercrombie's The Heroes (due on 20 January), and ensures that 2011 is going to be a big year for epic fantasy releases, with Lynch and Rothfuss both finally due to publish their next books and the potential final, last-ever Wheel of Time book due later in the year whilst Daniel Abraham launches his big new fantasy series.
Posted by Adam Whitehead at 12:51

We can add Ray Scott Bakker's White Luck Warrior for April 2011 as another major release. Plus the Robin Hobb short story collection and Richard Morgan's Cold Commands, all for April.

Fine by me, after delivering near enough 1 a year for 10 years, i dont think you can critisize him for this delay too much.
plus, im only on Reapers Gale and Return of the Crimson Guard anyway :D
I'll strech them out a bit

I love how no one even mentions Martin releasing a book anymore..

He isnt releasing a book anymore, its sad, but what can you do? Life goes on.