Judge Dredd returning to the movies

Somewhat inevitably given the current raft of comic book movies and remakes doing the rounds, a new Judge Dredd movie is on the cards. A previous film was made in 1995 starring Sylvester Stallone which was a critical and commercial disappointment, though it has a certain guilty pleasure appeal and the production design was very impressive. 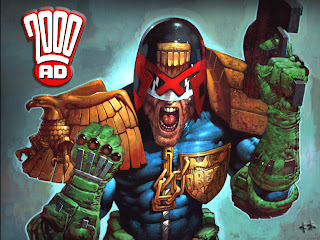 The new film will be scripted by Alex Garland, writer of the films 28 Days Later and Sunshine, and will be directed by Pete Travis (Vantage Point, Omagh and Endgame). Apparently it will be in 3D and will have a modest budget of around $50 million (which sounds ambitious, but there have been a slew of recent movies like Kick-Ass which have featured impressive sets, visual effects and action sequences on a relatively small budget). According to the linked article's sources, the script is truer to the comic book and retains the satirical edge and black humour notably missing from the Stallone film.

The character of Judge Dredd debuted in 1977 in the second-ever issue of 2000AD and has appeared in every issue since, as well as his own Judge Dredd Megazine and other spin-off titles. Dredd has been the subject of a number of computer games, novels, audio dramas and roleplaying games and has had cross-overs with numerous other comics characters, including several cross-dimensional run-ins with Batman. Dredd, his home town of Mega-City One (a vast conurbation covering most of the Eastern Seaboard of North America with over 400 million inhabitants) and his various enemies (most notably the Dark Judges) have become icons of the British comic industry and picked up a strong following abroad as well.

I laughed out loud when I read this post's title. I remember the old movie, with Stallone and Rob Schneider. "Bring on the luuu-www!" :D