After some weeks of speculation following the departure of Tamzin Merchant from Game of Thrones, HBO have announced that Daenerys will now be played by British actress Emilia Clarke. 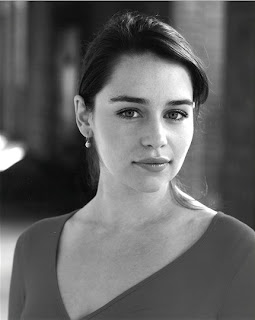 Clarke is a relative newcomer to the screen, with roles in a movie called Fossils and a role on the popular British daytime soap Doctors to her name, plus some ad work, as shown here. She also has more extensive theatre credits. According to George R.R. Martin, her audition was extremely impressive, and beat out several other strong actresses to the role.

Further casting announcements are anticipated in the near future, now that the recastings from the pilot are complete. Set construction is underway at the Paint Hall Studios in Belfast, and auditions have been held in several countries for a plethora of roles, ranging from major roles such as Littlefinger, Barristan Selmy and Renly Baratheon to smaller roles such as Osha and Drogo's Dothraki bloodriders. However, production requirements have seen a short filming delay of several weeks to late July 2010. Whether this affects the hoped-for transmission date of April/May 2011 remains to be seen.

UPDATE: Westeros.org has some clips of Emilia Clarke's appearance in Doctors here.
Posted by Adam Whitehead at 11:10

Not what I pictured, but i guess it works. Need to see if she can go from cute and cuddly to hard as nails.

Same here. I do not see Daenerys in her appearance at all. :/