Caim is a well-paid assassin. Josey is a rich nobleman's daughter. When their lives collide during a period of political and religious turmoil in the city of Othir, the fallen capital of the once-great Nimean Empire, events are set in motion which will see Othir destined to either reclaim its greatness, or fall into fire and shadow. 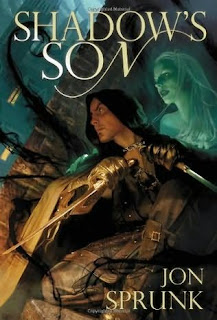 Shadow's Son is the debut novel by American author Jon Sprunk and also - you may be shocked by this - the opening volume in a trilogy. We're in familiar territory here: a Medieval European fantasy landscape, a young assassin protagonist and a female lead who tends to get kidnapped and require rescuing a lot. Those looking for something exciting and new are advised to keep moving on. Those looking for a traditional genre story, well-told, will find much to like here.

Shadow's Son is quite short (the review copy is 280 pages long; the final typeset edition is about 360) and is focused on a very small central cast (of both the 'heroes' and 'villains', rather than just the good guys). This results in a very tightly-focused novel with none of the page-filling sprawl usually associated with epic fantasy. There's political machinations, some talk of war on the horizon and rumours of a dark threat to the north (called, in the most obvious originality failure of the book, 'the Shadow'), but mostly this is the story of Caim and Josey and their enemies. This works very well, with Sprunk building up the tension and sense of danger in their storyline without too much cutting away to other storylines.

The book is well-written with some good characterisation. There are some intriguing flashes of inspiration here and there - Caim has a helper only he can see and hear, an interesting spin on the various 'head characters' from new BSG except Sprunk actually seems to have a clue what this character is - but it's Achilles heel is its lack of originality. Those who read a lot of epic fantasy may feel the book brings nothing new to the table, but at the same time it is an enjoyable, solid read. Sprunk is a good writer and a capable storyteller with a lot of potential for the future, and it will be interesting to see if the sequels are more capable of surprising the reader (and there are hints that the 'Shadow' might not be entirely evil and more of a complex race/force than first appears).