Three centuries from now, the human race has survived a nuclear war and expanded into space, colonising several nearby star systems. During their colonising efforts, humanity has come into contact with 'Them', a powerful and apparently ruthless alien race. War has raged ever since between the two races, a sixty-year cycle of blood and deadlock. 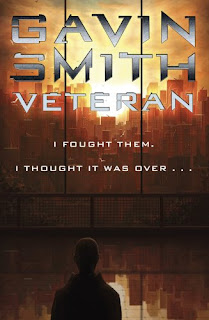 Jakob Douglas is a former British special forces operative dishonourably discharged from the service for organising a mutiny, but still held on the reserve list (thanks to politics). When it appears that an elite alien infiltration unit has breached Earth's defenses and crash-landed near Jakob's home town of Dundee, Jakob's commission is reactivated and he is sent after the creature, triggering a series of events that will have far-reaching consequences for humanity.

Veteran is the debut novel by British author Gavin Smith, and potentially the first in a series (the ending could go either way). This is a fast-paced, action-oriented but sociologically-aware post-apocalyptic, quasi-cyberpunk war story, strongly in the vein of Richard Morgan's Takeshi Kovacs books (Kovacs and Douglas could almost be old war buddies). Veteran, impressively, withstands the Morgan comparison quite well, even if Smith's infectious enthusiasm sometimes overrides his storytelling logic (Earth is simultaneously a technologically-advanced spacefaring world and also a Mad Max-style nuclear wasteland, which seems a bit contradictory). But the book is just so much fun that you don't really end up caring too much that the worldbuilding is a bit shaky in places.

Character-wise, this is a first-person story from Douglas' perspective, and he is a reasonable protagonist, even if the cynical, addictive-personality, ex-soldier with impressive resources is fairly cliche by this point. Douglas has some interesting psychological issues stemming from his background experiences, which are gradually revealed through strategically-placed flashbacks throughout the book, making him a more interesting lead. Some of the other characters are likewise fascinating, such as the psychotically angry embedded combat journalist Mudge; Balor, the egotistical pirate king of New York with a disturbing affinity for sharks; and Rannu, a badass but also ultra-cool elite Gurkha trooper. The female lead, Morag, is also intriguing, although Douglas' feelings of condescending protectiveness towards her does reduce her to something of a cypher in his eyes. This is at least deliberate, and resentment of this fuels Morag's later character development in the book.

On the weaker side, as well as the somewhat inconsistent worldbuilding there is a bit of a Joss Whedon thing going on with the cast of characters getting bigger and bigger as the book proceeds (Smith is ruthless enough to kill a few off, but not as many as you might think) and the focus occasionally dissipates, with some characters vanishing or being present but not contributing anything worthwhile for long periods. There are also a lot of scenes in the second half where the characters sit around debating the plot for long periods rather than getting on with things or giving the reader a bit more credit for being able to figure things out themselves. With another 100 pages or so shaved off the book, it would be much tighter and leaner.

That said, whilst the overall picture of the worldbuilding is confusing, the individual elements such as the Rigs (a city built out of abandoned oil rigs), Crawling Town (a mobile city of motorhomes, caravans and trucks) and the flooded, abandoned New York City are all vividly described, and there's a constant stream of exciting, well-choreographed battles (in the air, on the ground, inside space elevators, underwater, on the surface of asteroids and more) as well as effective reflections on human nature, the military complex and other issues. Smith, in probably his biggest deviation from the Morgan template, also has a wicked sense of humour and some sequences in the book are genuinely hilarious, whilst he has also nailed the team's snappy dialogue and banter quite well.

Veteran (****) is an accomplished and enjoyable debut SF novel. With some better pacing, Smith could easily rise to the big leagues of modern SF authors quite quickly, and I look forward to his next book. The novel will be published in the UK on 17 June and should be available on import from Amazon.com at the same time.
Posted by Adam Whitehead at 12:04

What a mouth-watering review. I added the book to my list. I like books where the hero is more senior.

Got a question for you. Amazon has the cover that you used in your post while BD.com has one that's different. Do you know which cover is the one that's being published?

If the BD.com one is the one of the guy in full view with a gun, that was the working cover. The cover I'm using should be the final one.