Richard Morgan has issued a further update on the status of the sequel to The Steel Remains, clarifying an earlier update. After a period working on his computer game projects (such as Crysis 2), Morgan is now working on the book once more and has agreed to try to deliver the book this Autumn for publication in April 2011. Morgan feels this goal is achievable. 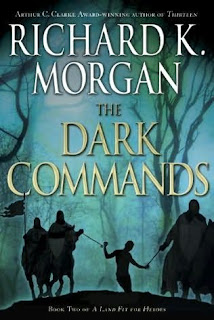 Interestingly, it now also sounds like that the book will be reverting to its working title of The Cold Commands.

If Morgan achieves his goal, it sounds like Gollancz could be releasing four of its biggest fantasy titles of 2011 within just a couple of months of one another. Joe Abercrombie's The Heroes, Patrick Rothfuss' The Wise Man's Fear and Scott Lynch's The Republic of Thieves are all pencilled in around the same time. Impressive if they they manage it.
Posted by Adam Whitehead at 00:58

Looks like the start to 2011 could be quite good!!

That's not even counting other books also due or rumoured to be arriving in the same period - Erikson's Crippled God, Bakker's White Luck Warrior, Abraham's The Coin and Dagger series...

I'm glad of the title reversion if it's true, The Cold Commands is better.

I bought the trade paperback edition of The Steel Remains awhile ago (U.S.A.). There was a blurb at the end from the next book, titled: The Cold Commands

With all these books we wont even notice the absence of Dance with Dragons in 2011 ;)