Get PORTAL for free (for the next two weeks)

Valve Software are making their multi-award-winning game Portal available for free until 24 May for PC and Mac owners. This is to both celebrate the arrival of Valve's entire back-catalogue (including the Half-Life series and Team Fortress II) on the Mac OS platform, and begin generating publicity for the release of Portal 2 on PC, Mac, X-Box 360 and PS3 in the autumn. 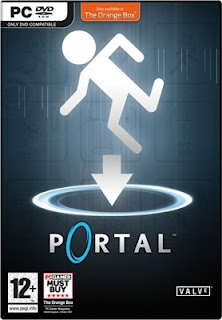 Portal sees the player having to escape from a test facility using an experimental 'portal gun' to teleport around locations solving increasingly fiendish puzzles whilst being threatened by the facility's somewhat deranged AI, known as GLADOS. The game was an unexpected huge critical and commercial success when it was released as part of Valve's Orange Box compilation in late 2007. The game generated further success when its somewhat demented title song, 'Still Alive', became a big hit thanks to its inclusion in the Rock Band game.

For the price of £/$/€0.00 and with system requirements only somewhat more taxing than those needed to run Microsoft Word, this is a no-brainer really. Go get it people (if you can, as Valve's servers seem to be crumbling under the weight of demand).

Clarification: that is free in the sense that if you get it now it will be yours forevermore, not that it will vanish after May 24th. And yes, you will need to install Steam (for free) to use it.
Posted by Adam Whitehead at 22:38

I played this game once, and absolutely loved it. It's just amazing how they did the PORTAL system. Not to mention how much fun you could have with it, like placing an "end" portal directly above a "beginning" portal, so that when you jumped in, you just kept going through the loop faster and faster until you died.

The idea for this game was brilliant. I played a 2D version of this and had loads of fun with it. Trying to solve puzzles by placing portals in odd places and taking advantage of momentum was the best part about this game.