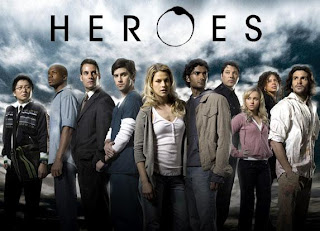 Heroes debuted in 2006 and was touted as a Lost-beater, promising to resolve mysteries and story arcs within a few episodes rather than letting them drag on for years. A large cast of intriguing characters was introduced, given superpowers and shown learning how to cope with them whilst a sinister 'company' tracked them down and a power-stealing serial killer was on the loose, all against the backdrop of a prophesied cataclysm that will destroy New York City. The first season was tense, well-written, well-paced and concluded in a decent manner (although the finale was a bit of an anti-climax, with the budget not stretching to the big showdown fans had been waiting for).

Unfortunately, the series never seemed to know where to go next. Attempted format changes and new characters never really took off, whilst other characters vanished without a trace (remember Peter's Irish girlfriend, lost forever in a collapsed timeline?) and plot elements were introduced and then immediately forgotten about (Claire's resurrecting magic blood). The limits and details of characters' abilities changed episode by episode. The evil serial killer Sylar became the most popular of the show, leaving the producers having to come up with increasingly ridiculous storylines to keep him around (he's bad, he's good, he's bad again, he's a spirit living in another character's head). The show very rapidly became a parody of its former series, and for the past two seasons Heroes fans have actually been asking NBC to cancel it whilst it retained a shred of dignity.

NBC have pulled the plug, following disappointing and dropping ratings (the show shed 12 million viewers between its first episode and its Season 4 finale). However, the show was profitable in international sales and DVDs, and NBC are reportedly considering a TV or DVD movie to round off the remaining storylines. But Heroes as an ongoing TV series is no more.

A shame, because when it was good in its first season, Heroes was really good, but when it was bad it was one of the most excruciating things on TV. Unfortunately, the show spent most of its time in the latter mode than the former.

In related genre show news, ABC has renewed V for a second season whilst cancelling FlashForwards. NBC has renewed Chuck. HBO are widely expected to renew True Blood for a fourth season after Season 3 debuts next month.
Posted by Adam Whitehead at 11:53

I watched the first season and then lost interest during the second season. You're right - the storyline seemed lost.

Haven't seen anything of Heroes season 4 yet, but indeed it seems nobody knew what to do with it after season 1. A shame, really.

Seasons 2 and 3 were utter abortions and should have been canned there and then. Season 4 (redemption) actually hinted that the show was finally finding some kind of direction. The biggest shame is that the network didn't allow them to wrap the show up last season as now it's left in limbo. It would have been nice to get some closure.

It's starting to look like Mark Charan Newton's "Death of Sci-fi" is moving into TV too. Aside from SG:U (which is surprisingly good), only remakes seem to have a chance of surviving now.

HBO or showtime needs to bring us some hard-edged sci-fi. If only the rights to Richard Morgan's "Kovacs" books weren't tied up in films...

couldn't be bothered with Heroes but somewhat disappointed FlashForward is history - even thought it departed significantly from the novel the TV incarnation could be quite clever. Even with V continuing I really have no hope at all of seeing decent sci-fi on TV anymore.

I watched the first season and then lost interest during the second season.
click here

I enjoyed the first season, but yes it didn't seem to know what to do after that. I don't think the writers strike which affected Season 2 did it any favours and it never recovered from that interrupted season.

I don't think the writers strike can be blamed for 2 seasons of the show being abysmal. Season 2 was already a mess before the strike affected it and if anything could have been used as evidence for the writers not deserving a better cut (a criticism mainly exclusive to heroes).
There were a lot of other shows that at least got by with the affect of the writer's strike.

There was no excuse at all for season 3 being such a horrendous mess.

Like other a lot of other people I watched the first season with great interest and lost my interest during the first half of the second season.
So I was not surprised about the news.

I also lost interest in FlashForward after a couple of episodes.
Again I have been not surprised that it has been cancelled.

Heroes deserved to be cancelled. What was once a good show got destroyed by crap writers pandering to Sylar fanboys. In time this trash will be forgotten, and I'm thankful for that.

Yes it is very true that after season1 of heroes that the rest was just a mess that didnt connect to the first season but they should have at least showed what happened on the last episode when claire revealed her secret to the world.. Us heroes fans deserve some closure