Six centuries ago, the world was destroyed in the Atomic Flame Deluge, leaving humanity scattered and broken and the world infested by radiation and mutations. One of the few surviving points of continuity to the old world is religion, with the Christian Faith surviving in the form of isolated monasteries and a 'new Rome' that has arisen in the east of North America. When a monk discovers relics dating back to before the nuclear war, a chain of events is set in motion that will reverberate down the centuries. 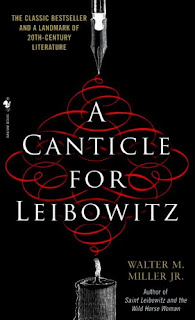 A Canticle for Leibowitz is a central text of the classic science fiction canon, originally published in 1960 and winning the 1961 Hugo Award as well as a slew of other awards down the years. Unusually for an SF novel, especially one published at that time, it has won significant acclaim from mainstream literary circles, impressed with its grappling of themes such as religion versus science and its assessment of the cyclical nature of humanity's ability and willingness to destroy itself. Whilst there has never been a filmed adaptation, the book's structure and some of its ideas directly inspired an episode of Babylon 5 called The Deconstruction of Fallen Stars which also addressed some of the same themes.

Leibowitz shares a common premise with Asimov's Foundation sequence, with its band of educated men seeking to preserve the knowledge and wisdom of a prior age through the barbarian dark ages of ignorance and fear until civilisation arises again, although the book lacks an analogue to Asimov's psychohistory. The monks of Leibowitz also have themselves little idea of the worth of the knowledge they are protecting, with complex technical schematics stored alongside shopping lists and betting slips. Still, the information they are guarding eventually gives humanity enough clues to begin its rise to technological greatness once again.

Leibowitz is a 'fix-up' novel assembled out of three short stories, set 600, 1,200 and 1,800 years in the future respectively, with corresponding shifts in cast and the technological levels of humanity. Each of the three sections addresses different but related ideas, such as faith and belief in the first part, the seductive nature of technology and power in the second and the clash between religious morality and common morality in the last part. For a novel written in the late 1950s, this book touches on many topics that remain contentious today, such as euthanasia, abortion and the relationship of Church and State. Miller supports no sides, but uses his characters to make compelling arguments on both sides that provides much to think about. The book also has deliberately, even powerfully ambiguous moments (particularly revolving around a recurring character and events involving a mutated woman near the book's end) that introduce huge potential for debate and multiple layers of interpretation to the book. 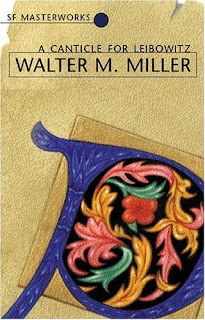 Leibowitz's literary qualities are founded in excellent writing, strong characterisation (with only 120 pages or so for each part, Miller gives us several memorable and impressive characters per section) and an excellent sense of humour (often very black indeed). Unlike some of its contemporaries, Leibowitz has not aged or dated itself at all, and like Non-Stop, The Stars My Destination and Lord of Light remains a compelling, essential read from this era of SF.

A Canticle for Leibowitz (*****) a rich, funny, dramatic, dark and thought-provoking novel. It is available now in the USA. There is no current British edition (for the time being anyway) but the book is easily available on import or second-hand in the UK. Walter M. Miller sadly took his own life in 1996, but a successor volume, Saint Leibowitz and the Wild Horse Woman, was completed and published with the help of Terry Bisson.
Posted by Adam Whitehead at 12:58

Great review. I wholeheartedly agree. A Canticle for Leibowitz is one of those books that I just couldn't get out of my mind after I read it, and the way it addresses its many themes has helped shape much of my own thinking. Magnicifent novel.