Having been in a coma for several days (but two years by her internal clock), Alex Drake has awoken back in 2008. However, she finds herself unable to let go of the world she experienced in her coma and visions of her friends eventually draw her back into that world. It is now 1983, Margaret Thatcher is fighting for re-election and Gene Hunt and his department are being investigated by internal investigations over the incident where Alex was shot. The main investigator, Jim Keats, is determined to bring down Gene Hunt after him wriggling off the hook for several past misdemeanours and tries to enlist Alex as his ally. However, other coppers are now starting to have strange visions and Alex finds herself becoming obsessed with one question: what happened to Sam Tyler? And what must she do to return to the real world and her daughter for good? 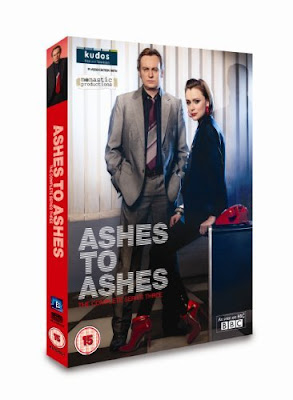 Ashes to Ashes' third season brings to an end not just the three-year story of this series, but also resolves outstanding questions and mysteries from its parent show, Life on Mars, as well. It's a big task to put on the show's shoulders, giving this season a sense of expectation and resolution only exceeded by the weight of expectation viewers have put onto the final season of Lost (in a quirk of fate, the series finales for the two shows aired within forty-eight hours of one another).

To start with, Ashes falters. Alex is returned to her coma and the world within it very easily, some might say way too easily and conveniently, in the first episode. However, soon we're back with Gene and the gang investigating crimes, which is good, but now with the added menace of Jim Keats looking over their shoulders, sometimes helping, more often egging on Gene to fail so he can bring him down. This element is interesting, with Daniel Mays turning in a great performance as Keats, but it is mishandled. The Keats storyline interferes with and slows down some storylines and feels like a tacked-on fifth wheel in others. Similarly, the Keats storyline also rips apart the dynamic at the heart of the show, with Keats trying to get each of Hunt's team to turn against him, resulting in lots of angry confrontations and a sense of distrust and suspicion hanging over the series. Given how hard-won Alex and Gene's mutual trust and respect was in the first season, resulting in their excellent and devastatingly effective partnership in exposing corruption in the police the second, this feels like dumping the characters back to square one for no real reason. Life on Mars' episode dealing with Ray's horrendous mistake was better, for handling the same story far more concisely without betraying prior character development.

There's also the mythological elements of the series, with characters other than Alex having strange visions of things they cannot explain. Whilst it adds a tremendously creepy element of foreshadowing to the series, it does again interfere with the episode-by-episode storylines. Some of these, such as Gene's bull-in-a-china-shop approach exposing an undercover operation or Gene having to work alongside his old nemesis Lytton from Manchester, are packed with promise, but never develop sufficiently due to time having to be found for the myth-arc and stuff with Keats' storyline. 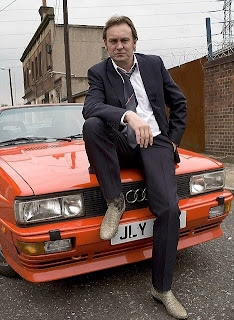 Farewell to the 'guv and to the Quattro

Luckily, if the series falters over the longer stretch, it does eventually end in style. The penultimate episode welds together the myth-arc element with the episode's own story (about ANC radicals fighting apartheid in London) very efficiently and is much more interesting to watch.

Then there's the finale, which sees actors, writers and the director firing on all cylinders. The great revelations about Gene Hunt's past and Sam Tyler's fate make sense, whilst other revelations, perhaps less expected, are equally convincing. The ending is emotional without being over-wrought, perhaps because there are real elements of tragedy and grimness to the resolution. It's not a neat ending with a nice tied bow to everything, and some revelations are bit of a blow to the gut. But it tracks, makes sense, is thematically satisfying (which is more than can be said for Lost's, but more on that later) and Gene's final words on screen are a great way of sending the series out pretty much where it came in, complete with great accompaniment from David Bowie. The post-credits clip from another famous British cop show is a nice touch as well.

The finale season of Ashes to Ashes (***½ for the season overall, ***** for the finale) is not the knockout, eight episodes of awesomeness that viewers were hoping for, but it is effectively dark and foreboding, setting up an excellent final episode. Gene Hunt and the team, you will be missed. The season will be released on DVD in the UK on 5 July 2010, and will appear in the US (on DVD and BBC America) next year.
Posted by Adam Whitehead at 17:39