The Quantum Thief by Hannu Rajaniemi

Jean le Flambeur gets up one morning and has to kill himself before his other self can kill him. Just another day in the Dilemma Prison. Rescued by the mysterious Mieli and her flirtatious spacecraft, Jean is taken to the Oubliette, the Moving City of Mars, to take part in crime and also to expose the secrets of his past, which have been lost on that planet lit by a moon-turned-singularity where time is a currency and memories are a treasure. Meanwhile, investigator Isidore Beautrelet, called in to investigate the murder of a chocolatier, becomes embroiled in shadowy conspiracies and finds himself on the trail of an arch-criminal, a man name le Flambeur... 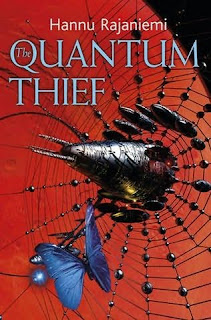 The Quantum Thief is the debut novel by Finnish author (but Scottish-resident) Hannu Rajaniemi and has been heavily trailed as 'the' big SF debut novel of the year. These accounts are correct. The Quantum Thief is a crazy joyride through Mars several centuries hence, a world of marching cities, people communicating by sharing memories and a race of hyper-advanced humans who originated as MMORPG guild members. It's the sort of book you'd get if Scott Lynch and Greg Egan teamed up, with the character and black humour approach of the former mixed in with the hardcore physics of the latter. It's at the harder end of hard SF, but is reasonably approachable by those without a degree in quantum entanglement, even if some sort of glossary to distinguish the tzaddiks from the Sobornosts might have been handy for the first few chapters. The opening feels like you're being machine-gunned with concepts and ideas, but once you manage to pause for breath and sort everything out, the story falls into place quite nicely.

Despite the hard scientific concepts being flung around, the book is character-focused with Jean, Mieli and Isidore as the primary protagonists. They are all well-drawn with some depth to them, impressive given that in their world memories and personality traits aren't always what they first appear. The story unfolds briskly (whilst the final layout means that the book will come in at 400 pages, the ARC is a modest 260 pages in length) with barely a pause for breath, the plot is gripping, the ideas complex but thought-provoking, and there are all the requisite shocking revelations and intriguing plot twists you could wish for. The only negative that comes to mind is a late-book revelation that feels like it could be somewhat cheesy, but in execution is actually perfectly acceptable.

The Quantum Thief is (*****) is a bravura debut novel, a confident and accomplished work that reinvigorates the genre. It is easily the best SF debut since Richard Morgan's Altered Carbon. The novel will be published in the UK on 30 September 2010 and in the USA by Tor Books in May 2011.
Posted by Adam Whitehead at 14:53

Your fourth five star review in a row Wert... you are getting soft in your old age!

Well, third ;-) SHADOW'S SON was the fourth book back and got a more middling score. And the previous two five-starrers are major SF classics which have been out for decades, so I don't think giving them five stars is too controversial.

Giving a maximum score to a new book, especially a debut one, is always interesting since it does risk inflating people's expectations to unrealistic levels. But in this case I think the score justified.

I think I remember reading about this on Charlie Stross' blog, where he said pretty much the same thing (ie: it's a great debut novel, don't miss it) Of course now I just have to wait for it to come out, another 111 days to go, according to Book Depository!

Has it been written in English or is it a translation from Frinnish?

It's been written in English, not translated. The author is a Finn resident in Edinburgh for the past eight years or so.

"The novel will be published in the UK on 30 September 2010, but has no US publisher as yet"

According to this review of The Quantum Thief the US publisher will be Tor who are to release it in Spring 2010.

It reminded me of the first time i read A Clockwork Orange: spending the first half of the book baffled by the language and general goings-on; working it all out later in context. (I didn't find out Clockwork had a glossary until I finished it!)

A very impressive debut - I'm looking forward to next in the series.

Are there any news about Hannu Rajaniemi and Jean le Flameur's Trilogy?
For example will there be a movie, TV show...? The author is actually "hard to e found" as he does not have a website (unfortunately that is).
And fans (like me) do not know how to reach him...well at least I do not. Could you perhaps, suggest a way :) ?
Any idea how much his sales have advanced?